I wanted to name this post "Larry's Hole" but felt it might send the wrong message.  Although this post is about Larry's hole.  The hole he digs and re-digs that we fill in so he re-digs it over and over again. 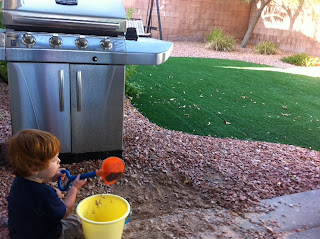 So I've monitored and tried to distract and encouraged other hole locations but those seven weeks of hell had me in survival mode.  And that hole got deeper and deeper.  Because please, if you can just keep digging and let Mom sit here I don't care where your hole ends up.  Dad may care but we're not worried about that right now.

Something else I'm noticing besides my lack of parenting presence are my fleeting food moods.  I don't call them cravings because when I was sick it was more like survival.  Like, what can I put in my mouth, chew up, and fully digest.  There was the day I went to the gym then decided I couldn't do anything until I'd had an Arby's Beef and Cheddar sandwich with curly fries.  I got to the drive-thru and ordered a jumbo meal.  JUMBO MEAL.  Pulled over in a parking spot and inhaled it in no time.  The next day if you had even SAID curly fries I would've lost it.  Probably all over your shirt.

I also had this weird Suddenly Salad kick.  It was lunchtime and nothing sounded good.  Then I spotted a box in the pantry and that was it.  Made the pasta and ate the entire box -- enough to feed a family of four (although serving sizes are such a joke......right?).  I don't know if it's shame or hormones but I haven't gone back to another box since.

My cantaloupe phase lasted about two days, potato chips were one entire bag (but in about 36 hours) applesauce phase added to 24 hours, French fries were about two weeks and my Caesar salad phase was a good three days.

Hopefully the next phase will be carrot sticks and celery because my clothes are not fitting like they used to.
Posted by MediocreMama at 11:28 PM

hahaha! Like what kind of a crazy person would let Larry do that?! ;)

And I too have polished off an entire Suddenly Salad box. That stuff is good! And it was an attempt to feed Gwen and Drake who were not having it, so I ate all but the two small portions that were on their plates, and then when I was done with mine, I ate theirs too. Pathetic.