For those who aren't in the know about toughest men alive, this is Chuck Liddell. Tod says the "Iceman" is the last person you want to get locked in a cage with...after he kicks your a$$ he rips your heart out and eats it! (This is obviously a direct quote from Tod) Well...

...Last night I caught Tod shaving off his holiday beard. However, he wasn't shaving it ALL off. He told me, "I want to look like Chuck Liddell." 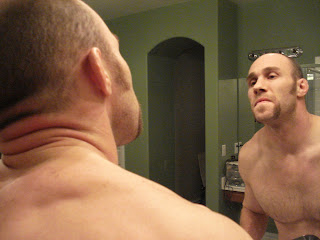 And so he continued to shave. These facial expressions come naturally with this look. Once you shave your beard Liddell style, tough glares automatically surface. 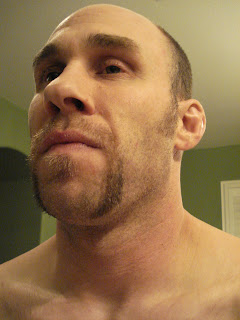 I am laughing out loud as I post this because Tod looked so trashy and creepy. 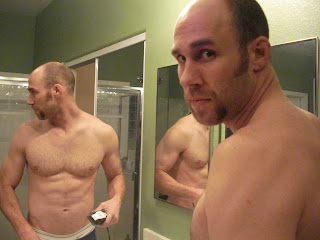 To my horror, Tod is still sporting this look today. I thought it would be a little joke at home, but he's already left the house today and ventured into the public....looking like Chuck Liddell. 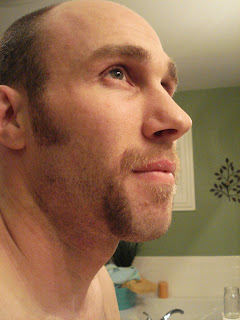 Tod looks very tough and mean with this look. Unfortunately it does not go with his sweet demeanor and loving nature!!!

Cam says Chuck Liddell sometimes does lose fights now. He's not in his prime. However, when he does win, he acts like he's ripping his chest open or something and that's cool. Cam hasn't shaved his holiday beard yet. Right now he looks like Andre "the Pitbull" Arlovsky.

You tell Cam that Chuck Liddell was at Tod's last wrestling tournament so we're famous basically.

Also, when Tod told me, "Chuck Liddell was at the tournament" I said, "Who's Chuck Liddell? Is he in our ward?" to which Tod replied, "The only connection Chuck Liddell has with Mormons is that he's probably killed one."

I just had a HUGE epiphany. Chuck Liddell is gonna recruit Tod. HOLY COW....this could be it.....

Glen says,"Don't judge a book by its cover!" He thinks Tod looks awesome, but then he would..... he looks just like that too!!

haha! thankyou glen for the support! finally someone who can appreciate proper facial landscaping... i believe if you are tough enough you can do whatever you want and it's cool!

seriously, I must say I have NEVER been more creeped out by Tod in all of my life. He has won the title of "most creepy white trash guy" in all of the land!!! LOL!!

I saw my good friend and fellow Chess-geek (who knew?) Chuck "The Iceman" Liddell at a recent chess tourney. I showed Chuck your blog and Chuck had a take on Tod's new look...

Chuck asked me to include this comment about Tod's new look.

"Hey, meet me at my next fight. I'll take you out, you Chuck-wanna be!"

I used to be tough like that. Well, not really. But I was kind of fast.

Tod... what can I say... you're awesome. Peter seems to do something similar everytime he shaves. What is it with you guys?

Yeah, last time I sculpted a nice "molestache." I also won first place against my roommates for best child molester mustache. So...