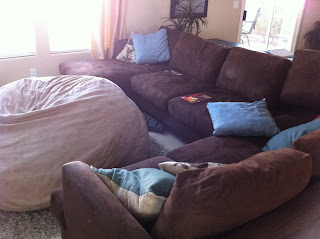 This was the sickest I've been with my pregnancies.  When was rock bottom?

Was it the 45 minutes I spent on the shower floor every night trying to avoid throwing up my dinner?

Or no, it had to be the week I ate Ramen Noodles for almost three meals a day.

Worse than that was the morning Lennon asked me to stop throwing up because it was "getting disgusting" and it made him want to throw up, too.  Poor, poor kid.

There was that night I had mashed potatoes and French Fries for dinner.  Just the thought makes me ill.

Maybe it was the day I got home from errands with an empty stomach which is not a good sign.  I opened the fridge and and spotted a jar of apple sauce.  And it looked tasty.  I was feeling so dizzy and weak that I skipped a couple steps, opened the jar, and started pouring apple sauce down my throat.  Picture it in your mind; it was as desperate as it sounds.

And it tasted so much better on the way down.

Glad all that is over.
Posted by MediocreMama at 8:37 AM

I hear people get more sick with girls, who knows, not me obviously. In fact I just got sicker with each kid, but I'm going to guess you're having a girl this time. Good luck! So glad you made it through that 1st trimester

Glad you got your first trimester out of the way. Uhgg, sounds miserable!

maybe now you can get some relief! the first trimester always makes me wonder why in the world i wanted kids in the first place! congrats again!

I so feel your pain AND I'm soo sooo glad I'm not you right now.

My baby bump is bigger than yours. And I'm not pregnant.

Lori - I think I'm the same. Just worse with each kid. Which means maybe this is the last freaking kid.

Sarah - I thought that every single day for seven weeks. Feeling better, though so who knows.

Leah - I don't know if I should laugh or drive to Utah and egg your house for that comment.

Diana - You haven't seen it recently. And when you go through hell you're allowed any bump you've got.

Congrats, Holly! I'm sorry the first trimester has been so awful. I hope the second is a breeze. And I think your bump looks super cute. I'm scared what I'm going to look like when I get pregnant again. I felt like I was showing impossibly early with my second. My family kept saying, oh I think you're showing! And I kept denying it.

now that is rough! ah chick! hope you get feeling better asap! love your lil bump~

I'm going to make tim read this (as all husbands should). . . . I don't think he'll ever mention another kid again. Congratulations! You made it through the first bit - it can only get better from here, right?