What's been going on around our house this month: 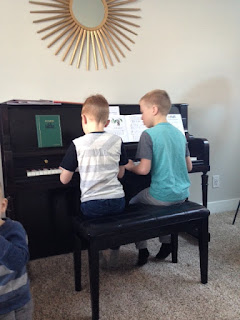 These two practicing piano together.  Nice when your older son knows how to help the younger because I know nothing about piano.  Thinking about teaching Ruby the violin if I dare. 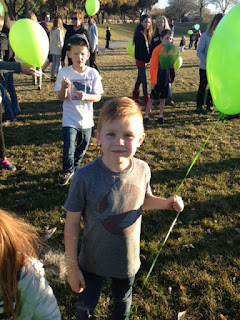 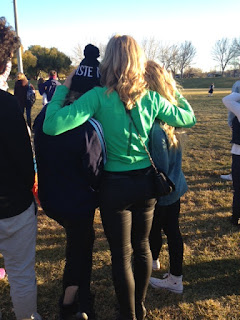 It's been three years.  Hard to believe. 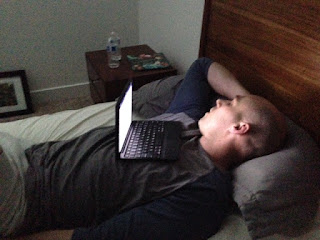 I don't want to embarrass Tod but he slept like this after church the other day for hours.  Kids coming in and out, screaming, fighting....he didn't even move.  He is blessed with the ability to tune it all out and it makes me jealous. 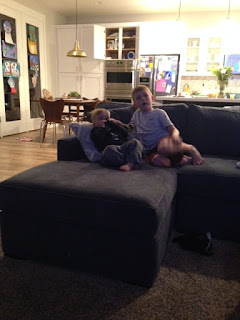 Larry and his best buddy Thomas. 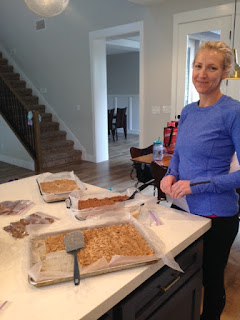 Megan came over Friday and we spent the morning making homemade Larabars.  Way cheaper than regular bars.  I don't have many friends who will spend the day doing this while also taking turns going for runs/watching the kids.  Match made in heaven. 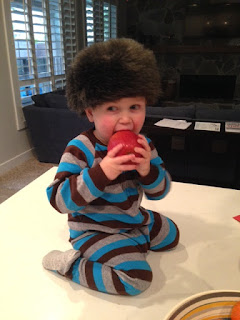 Tod took older boys to the Beehive Brawl tournament in UT last weekend and called me that night.

Tod: "You will never guess what I bought Larry from a gas station."
Me: "A coonskin hat?"
Tod: [stunned silence]

I don't know how I knew but it looks pretty sweet on Thomas too. 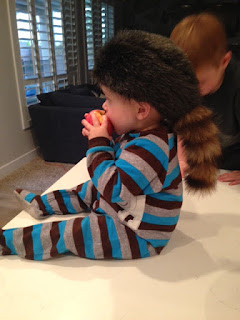 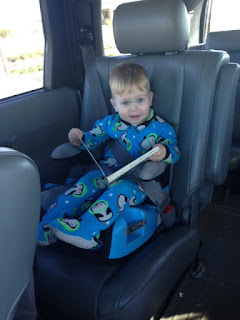 This illegal picture was taken when Tod forgot to put carseats back into my car and Ruby was late for school Monday morning.  He survived the five minute drive.  Stuff you do with your fourth kid.  Don't arrest me. 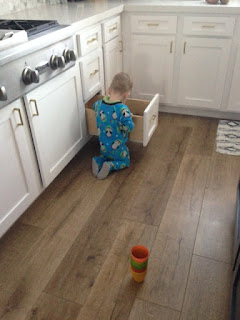 Speaking of fourth kid, Thomas is getting funny.  He says Uh Oh, POPO when the kids see a cop, he likes digging in drawers and he now knows how to escape the barricaded loft.  I didn't know how he kept getting out until one day I walked by and witnessed his kamikaze roll off the back of the couch, suicide mission style, and taking the drop to the floor like a real man.

That has changed life dramatically. 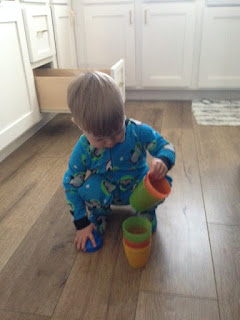 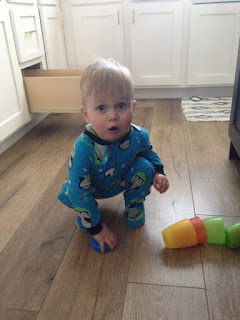 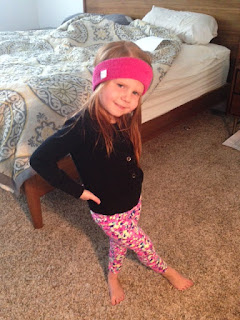 And this one walked into my room yesterday and asked if she could workout in my bathroom.  I told her yes and then before I knew it, this was happening: 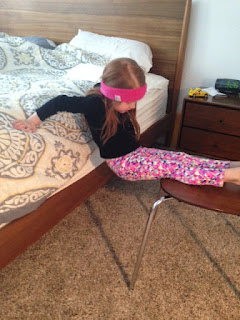 She also had croup last week so I took her to the doctor.  When he walked in, he said, "Hello Ruby, how are you feeling today?"

Ruby: "Kinda bad...I've been coughing a lot...wait a minute, how did you know my name?  Have you been creeping around my neighborhood?"

He laughed, to my relief.  That was when she turned to me and asked,

"Is this doctor totally cray cray?"

Posted by MediocreMama at 3:32 PM

Love you ... Love your blog ... and absolutely LOVE those grandkids of ours!! Thank you so much for each and every one of those precious babes. I haven't forgotten how sick you were with each pregnancy ... and having four children can be challenging even on a good day. Thank you Holly for what u went through to get them here & for the wonderful wife & mother you are to Tod and the tots!! We really enjoyed seeing you all at Christmas and were so glad you could come out for Coach Glen's retirement party. That was such a neat experience. I was so proud of Tod. Tommy is growing up too fast & is so cute. He really reminds me of his Dad in so many ways. Love you ... Keep blogging & posting those cute pictures. ... You make my cup runners over!