It started with Thomas and a 103 fever.

Two days later I got it.

Lennon came home from trick or treating burning up.

The next morning it was Larry.

I thought Ruby had escaped it all until she started throwing up.

This all happened during Nevada Day's five day weekend and I almost lost my mind. 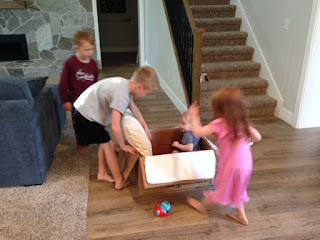 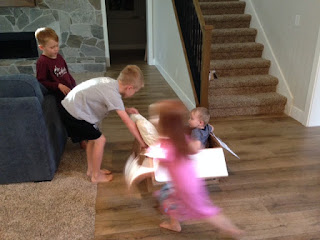 One day (I think day four?) the kids were so sick of being sick that they built this Rolls Royce and started pushing the baby around in it.  No one was fighting, no one was complaining or arguing so I documented.  Silver lining in a pretty stormy long weekend.  Thomas was in heaven. 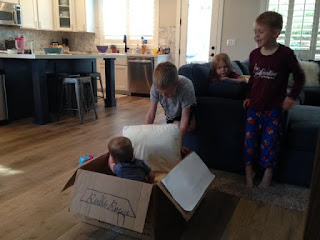 Another silver lining: Ruby kept throwing up so when I put her to bed I put a bowl next to her on the dresser.  I told her to use it if she needed to throw up and then to come wake up Mom and Dad.  She said ok and went to sleep. 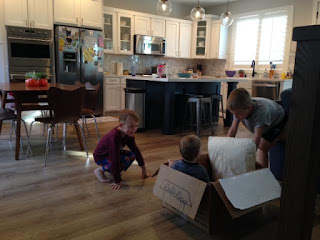 The next morning I went into her room, assuming she hadn't thrown up.  We didn't hear from her all night. I looked into the bowl and it was full.  She threw up all night in it and never woke anyone up and didn't even make a mess.  I asked her if she just threw up and kept going back to bed and she said, "Yep!"

Sorry boys, your sister is tougher than any of us.

Also, a quick public apology to Tod for backing out of the garage today before the garage door was totally open. The good news: Garage door still works!  Only missing that bottom piece which (in my opinion) was just for looks anyways.

Posted by MediocreMama at 7:51 PM

Email ThisBlogThis!Share to TwitterShare to FacebookShare to Pinterest
Labels: five day weekends, Nevada Day, Ruby Tuesday, sick kids, we drive a toyota, when entire families get sick, Why do my boys care about Rolls Royces

Our little Ruby is tough alright! We are impressed! Way to go Ruby Do!! We love you & hope you are feeling much better! We loved having u and the boys visit for Christmas!!😍

We love and miss the kids! Way to go, Ruby!!