Sometimes I walk around the house aimlessly not knowing where to start.  Then someone rings the doorbell with cookies and all hope is lost.

November and December so far: 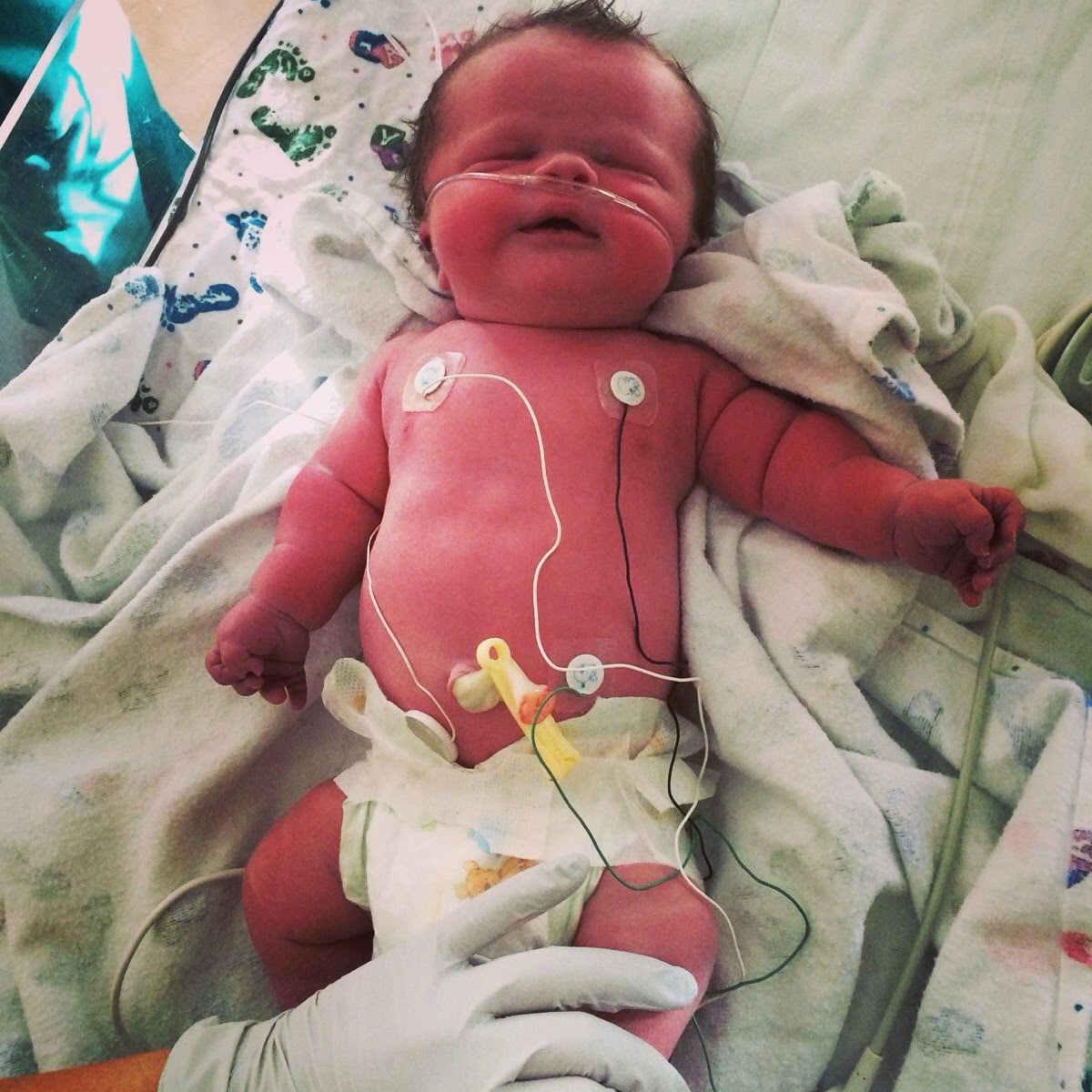 Cooper Jay Lowell was born and he is perfection.  After two weeks in the ICU he came home and his parents are in love.  I've seriously never seen first time parents so calm, so easy going, so happy.  Tommy and Shantay are pros. Family pictures are done.  Tod is a really good sport about 98% of the time and I want to acknowledge that and publicly say I appreciate it.  But the man becomes a two year old child when it comes to family pictures and it's a fight every.single.time.  Our photographer (Tiff's little sister) was awesome.  This picture (above) was before the tantrum began...Tod lost it during our couple's pictures.  I'd like to think it had little or nothing to do with his feelings for me but...it felt personal.  I'm sure Breanne wanted to run back to her car and drive straight home.
After pictures we took the kids to dinner and silently ate.  I could feel the stress in my body slowly release as I sat and thanked God in several prayers that pictures were done.  That night we were all asleep by 8 pm because for some reason...pictures are stressful.
I'd like to thank my four kids: Lennon, Larry, Ruby and even baby Thomas for being great sports and cooperating the whole time.
And I'd like to thank Tod for: Showing up? Not leaving?  Wearing clothes?  Nice job bud. 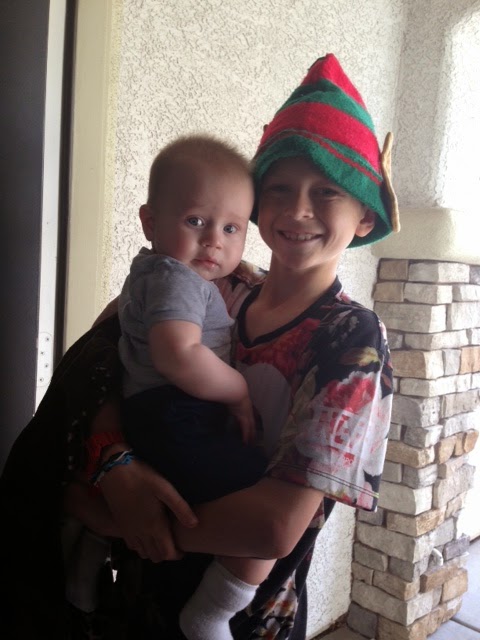 Life at home is busy but happy.  Every night around 5 pm, the Rasmussens usually send someone down for Thomas.  They take him home and snuggle him, trim his nails and pay attention to him.  I'm sure he appreciates the change of pace.  Pictured above: Cody. 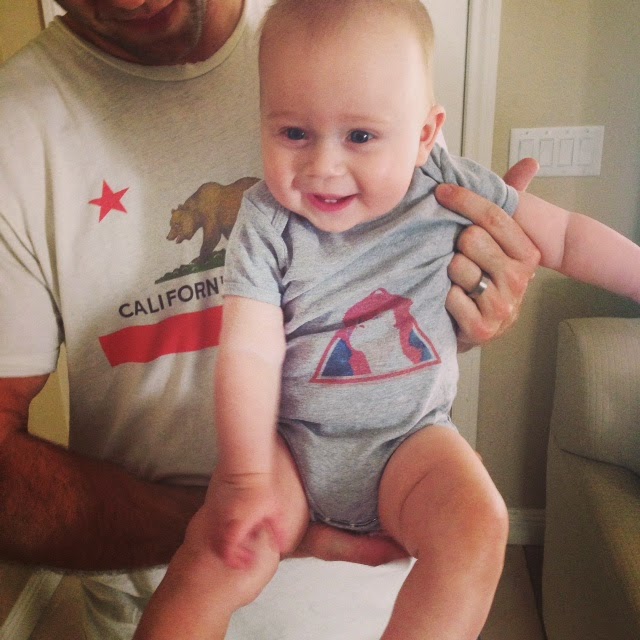 Here he is again wearing Aunt Ali's Major Tom onesie that made me squeal when I opened it.  She sends the coolest gifts. 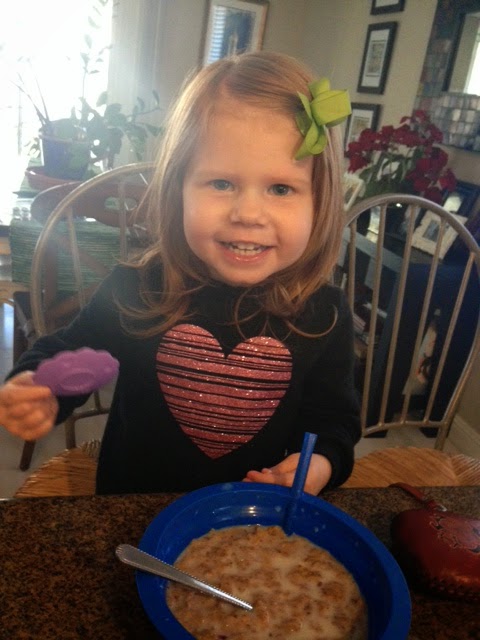 This girl is with me all day everyday and I've never enjoyed a two year old more.  She is so articulate, so sassy, so aware of people's feelings.  She's also obsessed with Annie (the original)(no, we're not paying money to see the remake) and the other day at church leaned over to Tod and whispered,
"I love you Daddy Warbucks."
She can also be heard around 9 pm at night from her crib yelling, "Tomorrow!  Tomorrow!  I love ya! Tomorrow!  You're always a DAAAAAAAAY!  AAAAAAAAAA! WAAAAAAAAY!" 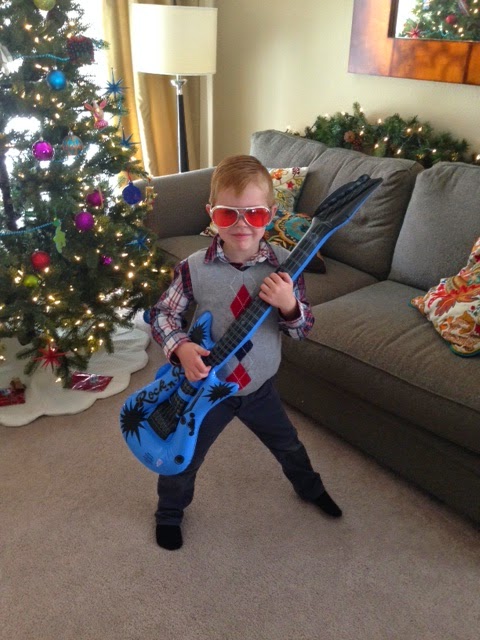 Larry -- earned Reverent Rockstar at primary on Sunday.  We were all proud except Lennon who cried because he hasn't earned it yet and it all made for a really fun afternoon. 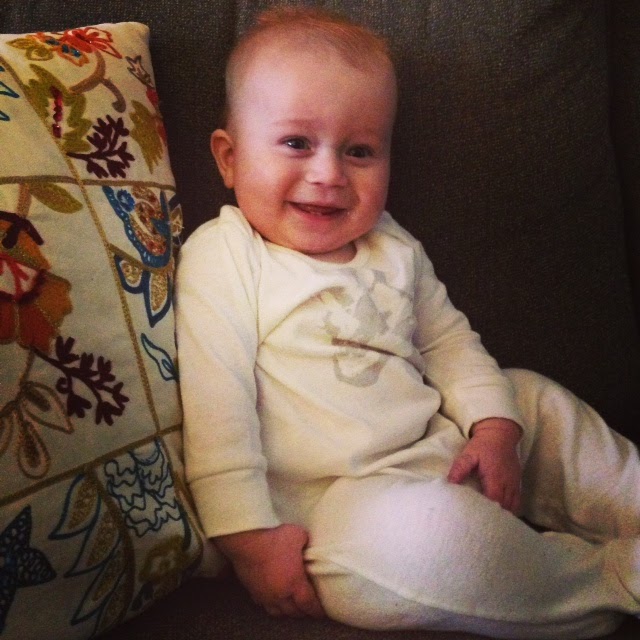 Six months this month and the chubbier he gets the more we love him.  He already has SIX TEETH so he's had a few rough weeks of teething.  Poor thing. 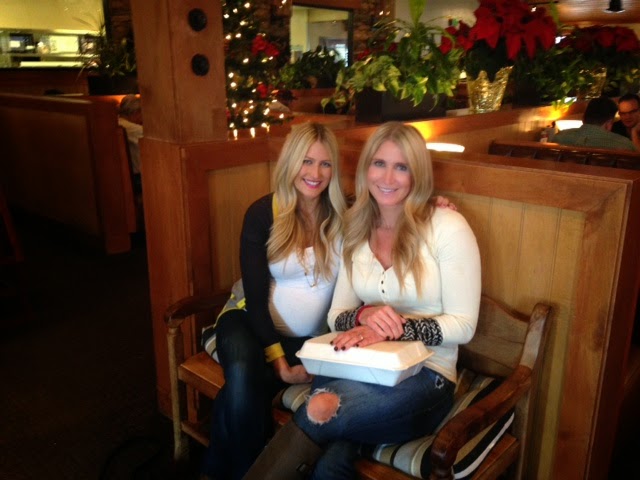 We took a quick trip to Utah for Ali's surprise 40th so I was able to see Alana for the first time in over a year.  She's pregnant with #2 and so beautiful.  From preschool until now, she's always been my best and most loyal friend. And our hair was the same so that was nice. 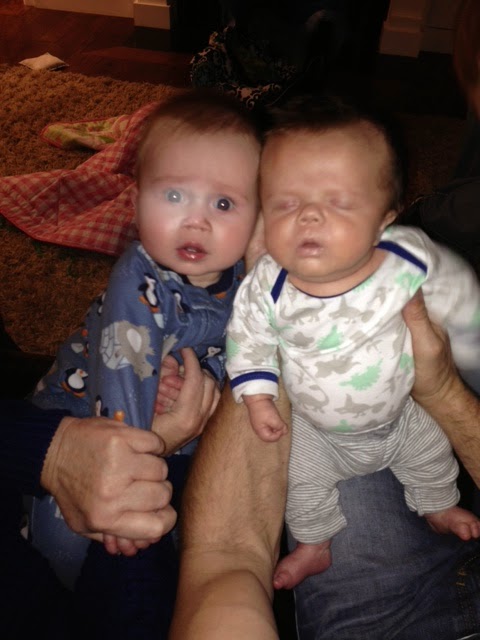 We finally met Cooper and fought over who got to hold him the entire time.  Just look at those feet and look at that face.  I have a feeling these two will be tight. 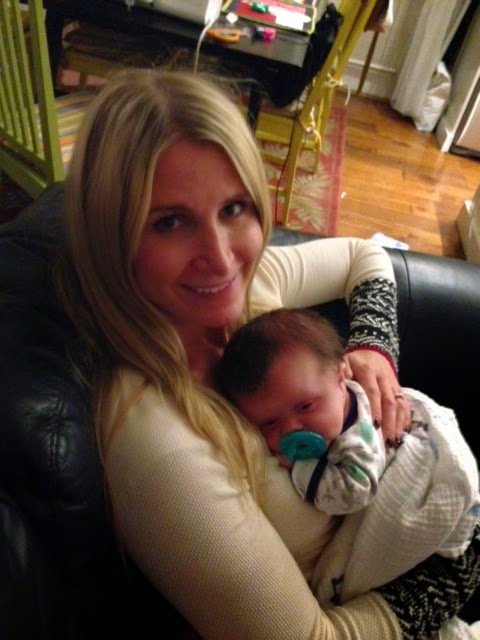 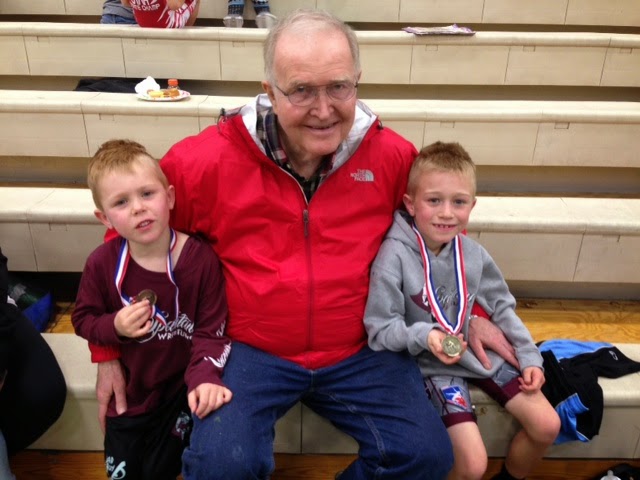 Tod signed up the boys for a tournament while we were in Utah.  They walked in...not knowing anyone...not having their teammates and coaches present...and went for it.  I am so proud that my kids are brave.  They have confidence and go for stuff.  And their Grandma KK, Bill, and Grandpa Larry got to see it firsthand.
Lennon walked away with a 1st place medal and Larry took home a 3rd place.  My boys are tough. 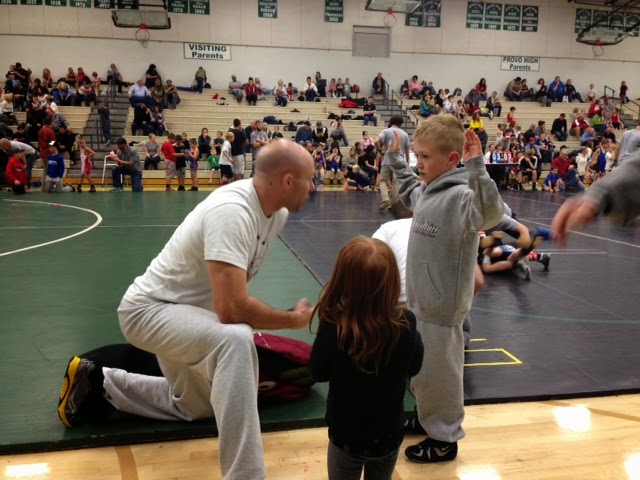 Watching Ruby watch them I realized, this is going to be her whole life growing up.
It made me happy.  I think she'll love it.  Except for when she doesn't. 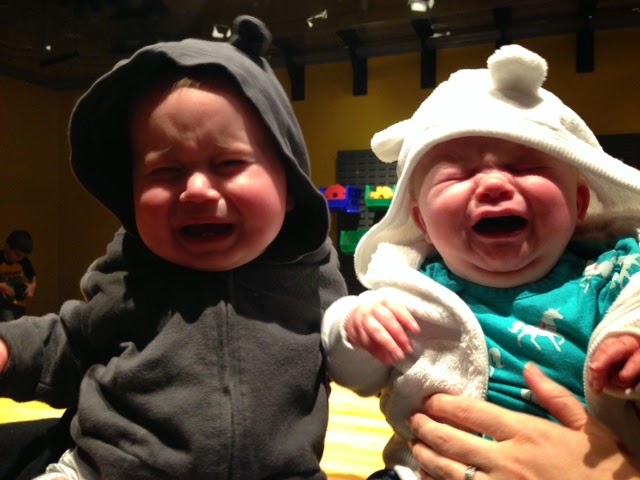 We spent most of the weekend with Tod's family catching up and celebrating Ali and Tod's birthdays.  Pictured above -- Tommy and Eudora who didn't really like the museum. 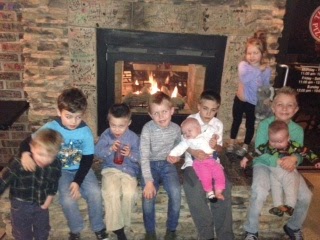 The best we could get of all the kids.  I can't believe four of these kids are mine... 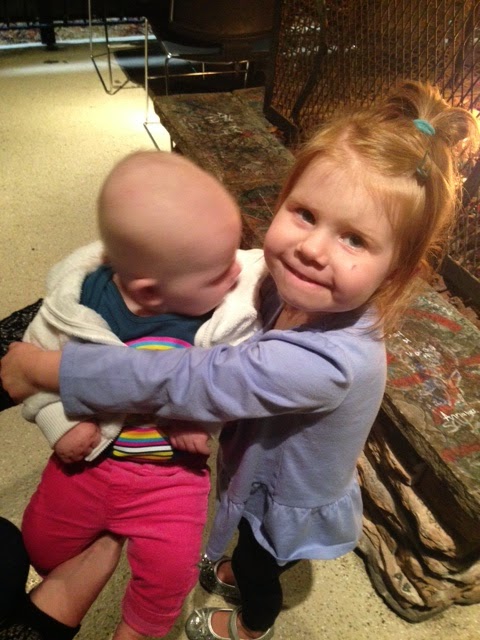 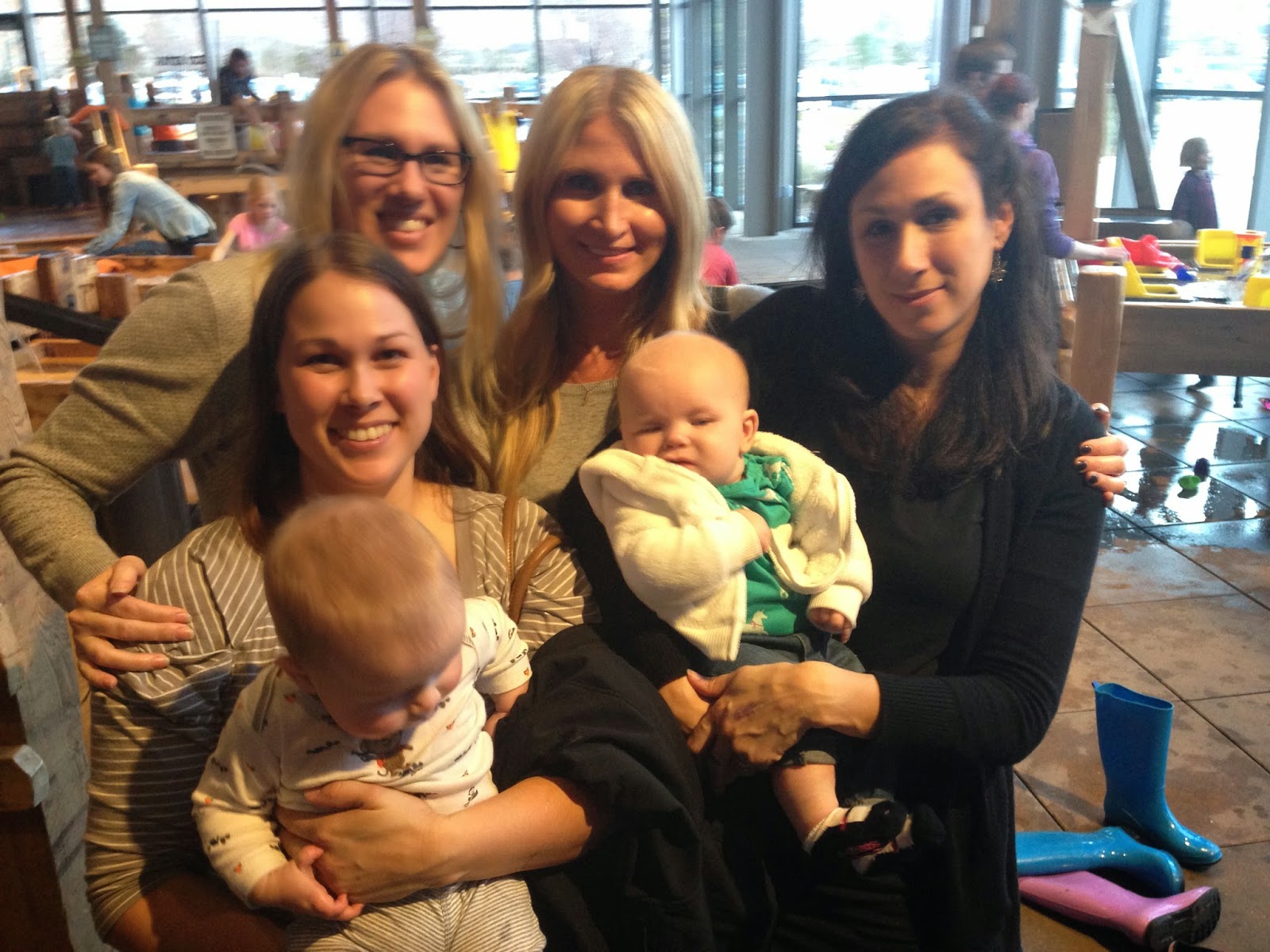 My sister in laws are kind, empathetic humans.  I appreciate them a lot. 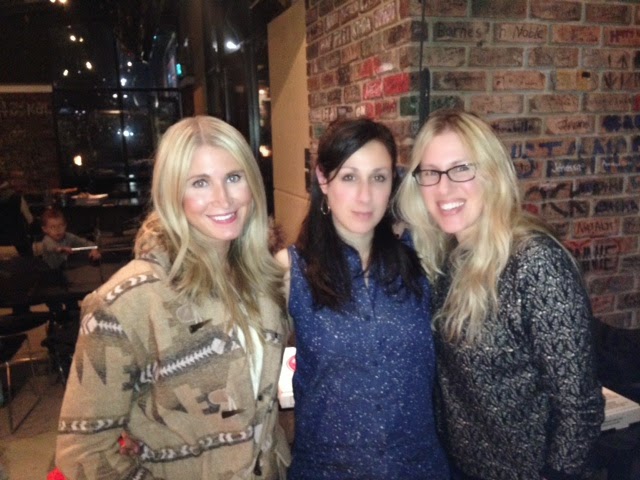 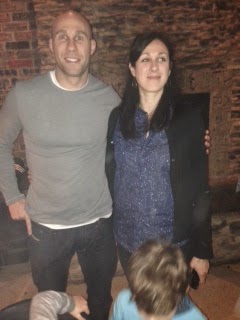 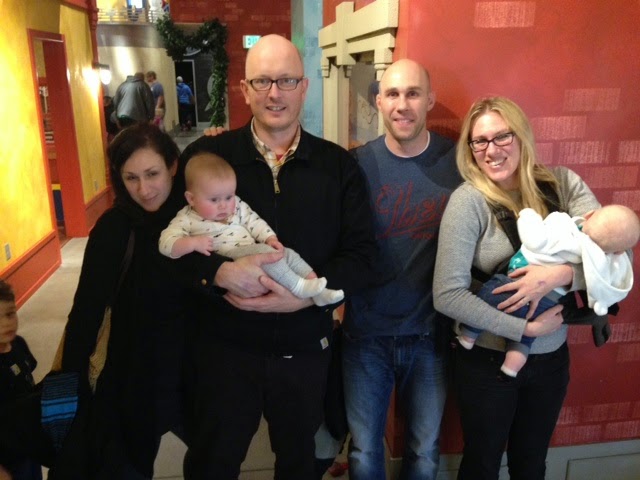 Props to Jon who managed to plan the entire weekend and surprise Ali the day of.  Nice work. 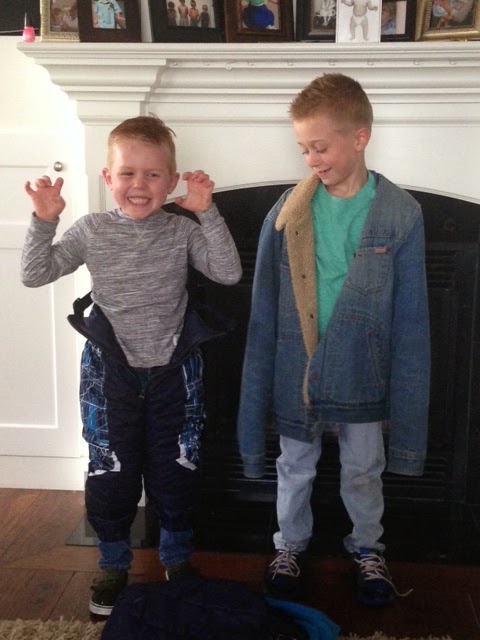 Saddest part of the weekend: On our last day in Utah it snowed and my boys went nuts.  Found a snow suit for a three year old and my old college jacket and headed outside.  They barely even wear hoodies back home.  Started throwing snowballs at each other then both started screaming that their hands hurt.
No gloves.
But check out Larry in this suit: 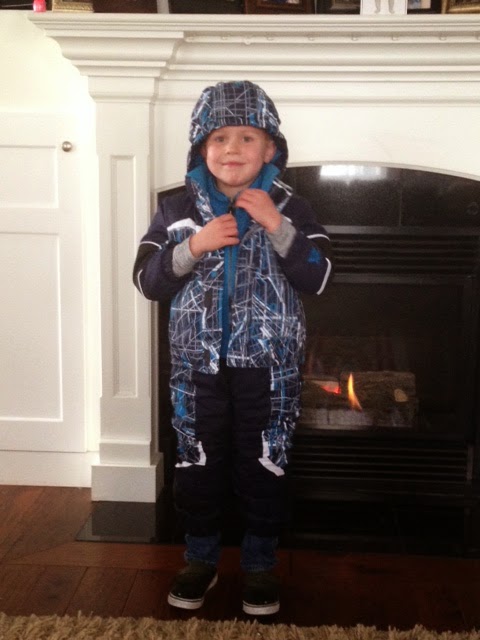 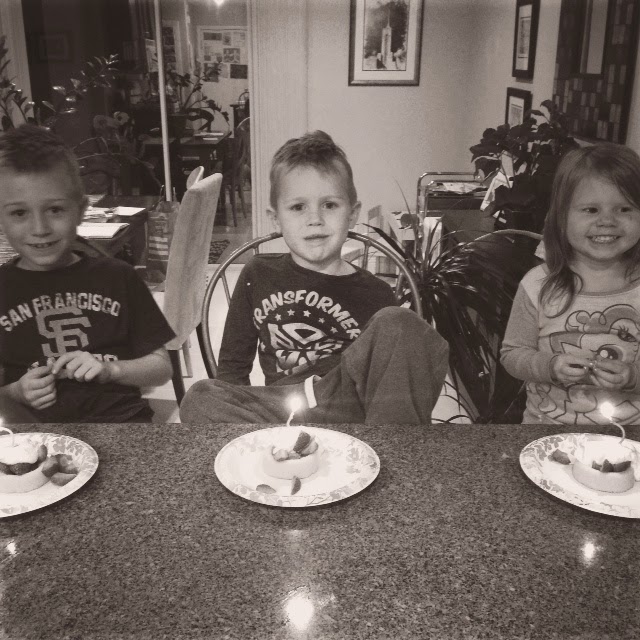 We got home around 2 am from Utah and celebrated my dad's 61st birthday the next day.  Tiff and her girls  brought dessert over and we sang Happy Birthday to him.  Sometimes it hurts that he's missing so much and then other times I swear he's not missing it but has the best seat in the house. Looking back, I think of December and realize my mom was driving us to and from dance classes in the snow, sitting through basketball games and piano practices.  Driving me 45 minutes each way through snow to cheer competitions that usually lasted entire Saturdays (which are precious in December).  I also remember all of us opening gifts on Christmas and my parents just watching and smiling.  They didn't receive much but always gave.
Being a parent is teaching me to forget myself and live for my kids like they always did.
I'm tired but I'm happy.
Posted by MediocreMama at 10:50 AM

Email ThisBlogThis!Share to TwitterShare to FacebookShare to Pinterest
Labels: Are the holidays over yet? Burned out, Christmas, December 2014, family, Utah, we have four kids, wrestling

1. Remind me to tell you about the year that Ryan showed up for family pictures with a hoodie on. We told our photographer that we would not be taking any pictures together except for a whole family picture, and not to ask questions.

2. I LOVE that your boys wrestle.

3. You may be busy, but you pull it off looking fantastic!

Most books Bulk Shower Caps and newspapers are printed using this process. Johann Gutenberg, of the German city of Mainz, developed European movable kind printing technology in 1440. Johann Fust and Peter Schöffer experimented with him in Mainz.