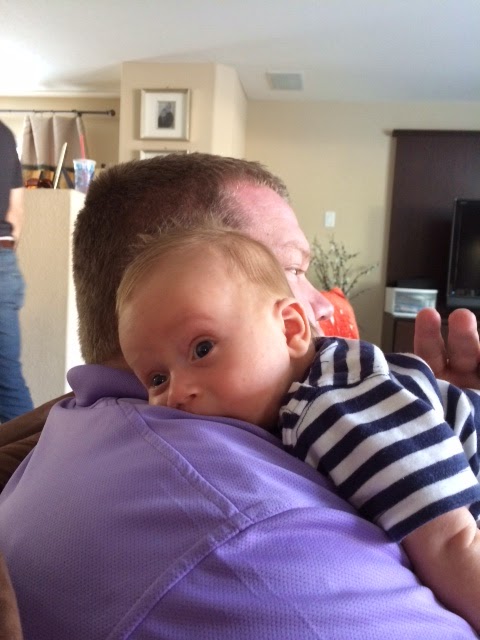 Tod and I agreed while I was pregnant -- if the baby was a boy, we'd name him Thomas.
My only brother's name is Thomas Knight Lowell.  I was mean to him growing up -- like really mean.  I have no clue why.  Now he's one of my best friends.  But he grew up with a pretty sick dad and three kind of crappy sisters.
He deserved a really good apology.
He's also a huge part of my kids' lives.  With my dad gone, it feels like Tommy has become the guy they look up to (besides Tod).  He's taught them how to trash talk and sends them Ninja Turtle eye masks in the mail.
Additionally, my mom's little brother's name is Tommy.  He was Sam's twin and died when he was only four weeks old.  I have many memories of holidays or parties with our family where my grandma would stop all of us and remind us about Tommy.  That he lived.  That he existed.  That he was our uncle/brother.  That we can't forget Tommy.
Now she is with Tommy, raising her little boy.
My mom raised her Tommy.
Now I get my own.
His middle name is Quentin because in 1999 I met Quentin James Bell on Vashon Island, WA.  We were both a part of a program through Ricks College that took 25 freshman and offered a semester of school on alternate campus sites.  Vashon Island was where I began my college experience and Quentin (Q) was there following his mission to Denver.
We were immediate friends -- mainly because we laughed at each other's jokes and were the only ones who cringed when one particular motivational speaker encouraged us to be "more better."
Maybe you had to be there.
One day after we'd moved to Rexburg, Idaho to continue school he found me in the library where I worked.
Q: Holly...we need to talk (pulling me into an aisle of books).
Me: What.
Q: I have found....the man....you're going to marry.
Me: Who.
Q: That guy right there...the one making copies.
I looked through the books and saw a muscular guy wearing a yellow collared golf shirt (?) making copies.
Me: What's so great about him.
Q: He's like....a REAL man.  He's hilarious, he's smart, he's the hardest working guy I know, and I worked out with him this morning....he's an ANIMAL.
Me: Huh.
And so it continued...two years of Ricks College...Q telling me all the reasons I should date/marry Tod and me wishing Tod would just ask me out.  I got to know Tod through Q's stories as his roommate and best friend.  Because of Q, I spent a lot of time observing Tod as a friend.  I even remember a dance where I saw Q beg and beg until Tod finally asked me to dance.  Twice.
It's in my journal.
Four years later when we finally started dating, I remember feeling overwhelming gratitude for Q.  For caring enough about both of us to want our happiness.  And for knowing us well enough to recognize our perfect match.
Thomas Quentin Wever -- he's special already.

Posted by MediocreMama at 10:10 PM

I love stalking your blog! Sometimes I need a laugh or a cry but I think your family is amazing. So keep writing and I will keep reading ;)

Why did I think you'd stopped blogging? So glad I found this. Love you and your writing..