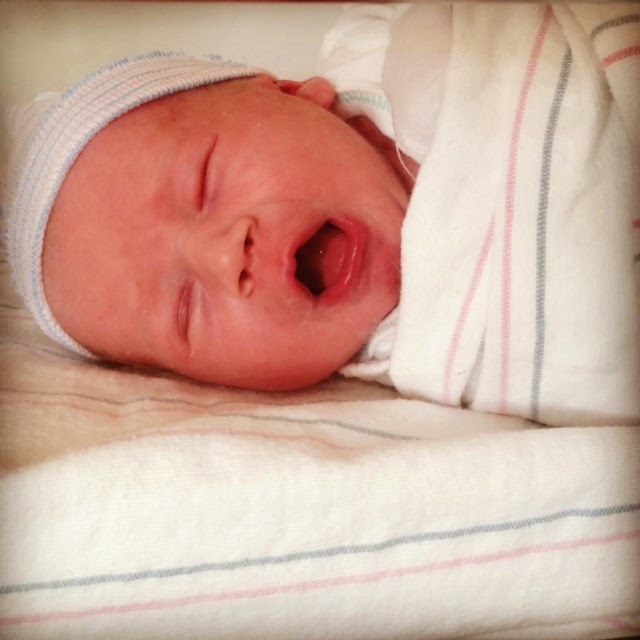 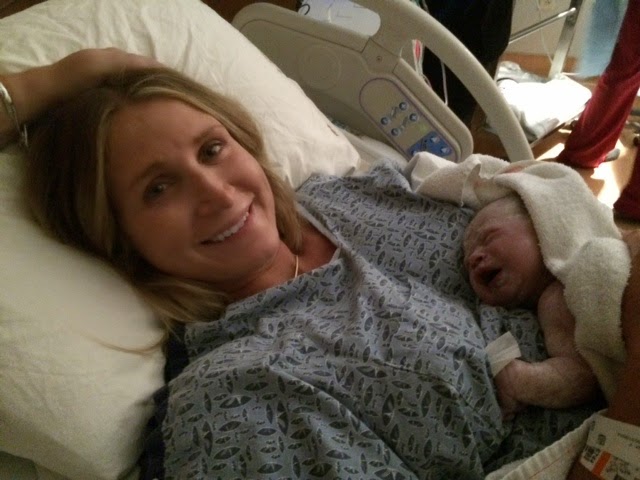 It only took 27 hours of labor, two painful IVs, and three awesome epidurals to get him here.


The look on my face is one of total relief. 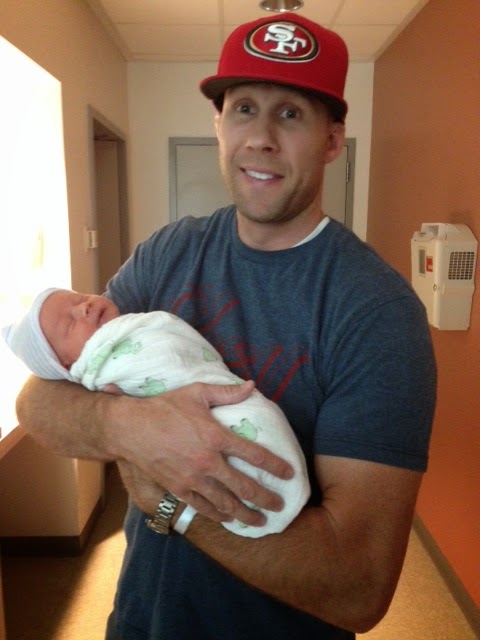 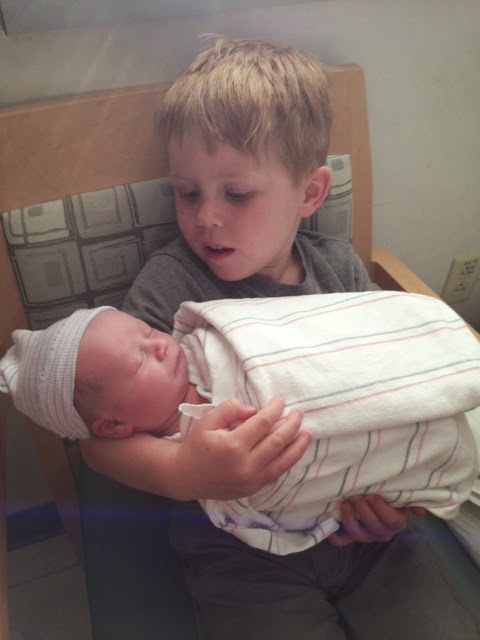 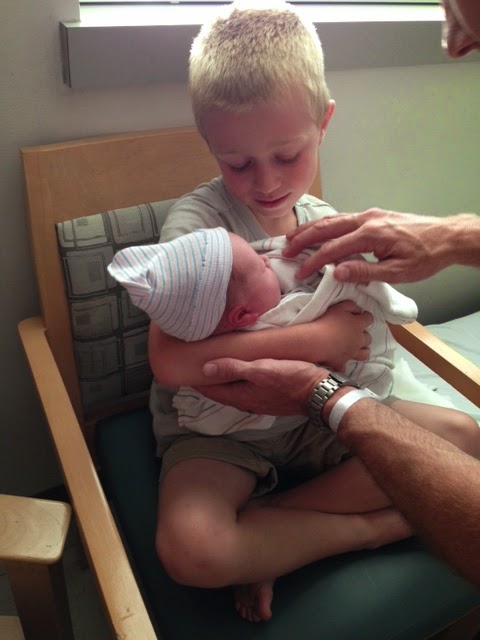 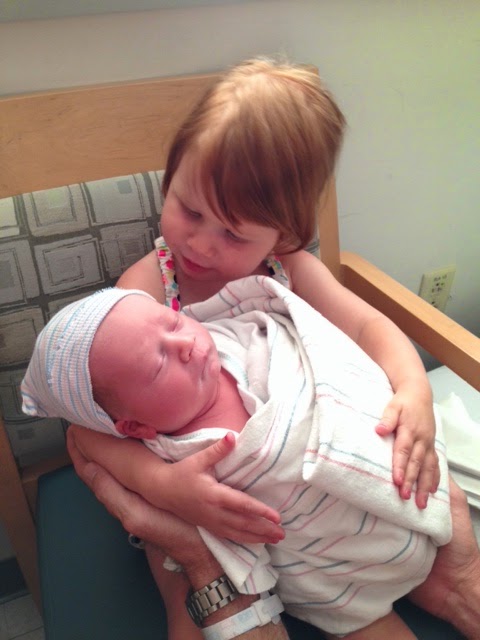 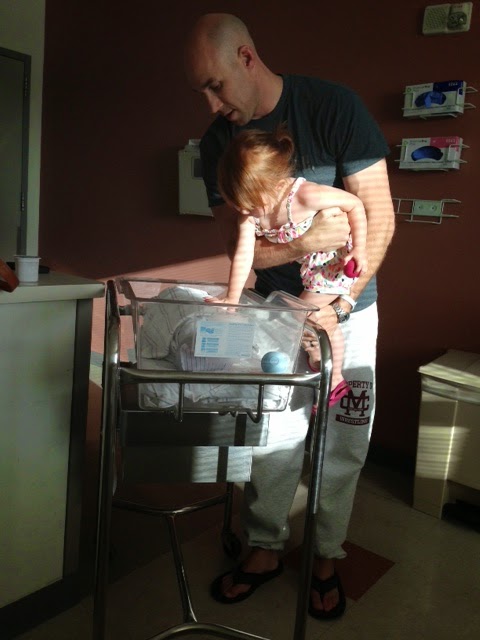 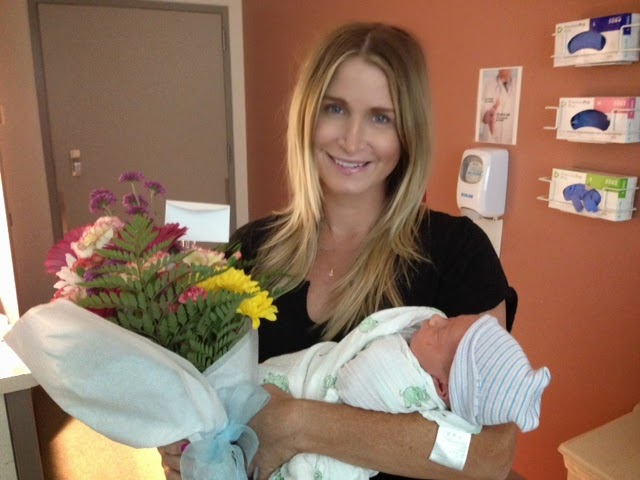 Luckily when we left the hospital we had Grandma KK waiting for us at home.  She helped keep things together when it felt like everything was falling apart.
What is it about newborns that make us fall apart? 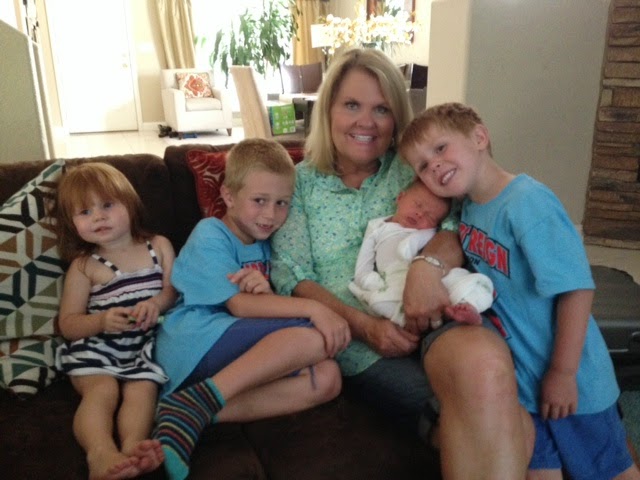 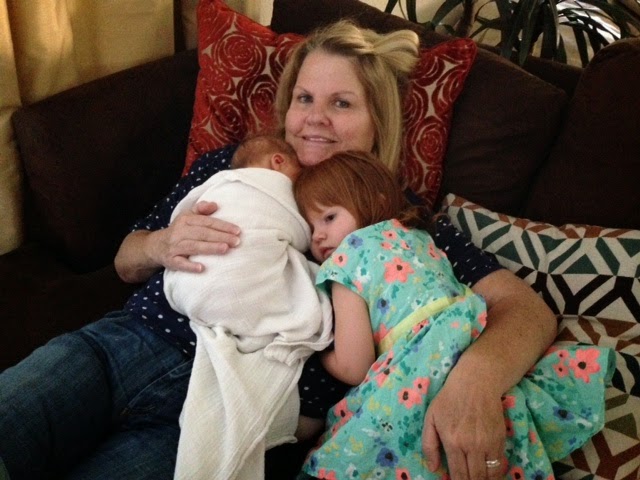 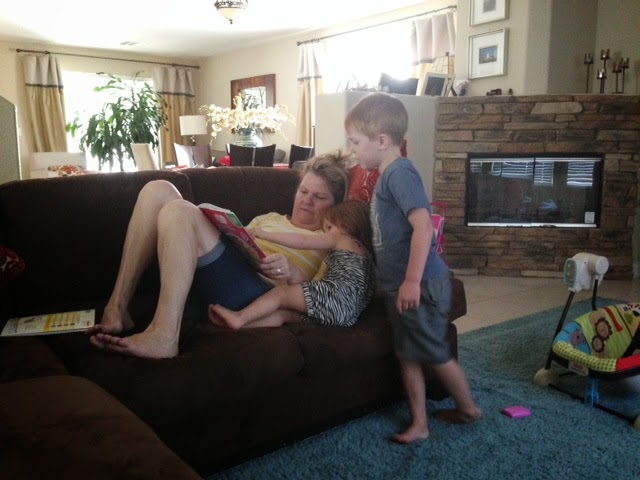 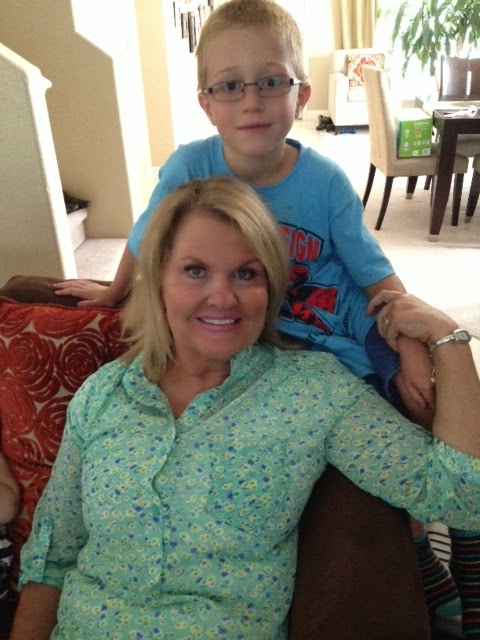 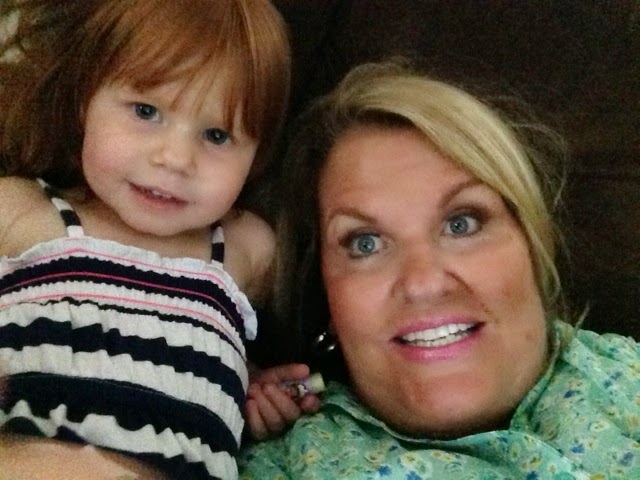 When Grandma left, Dad was in charge. 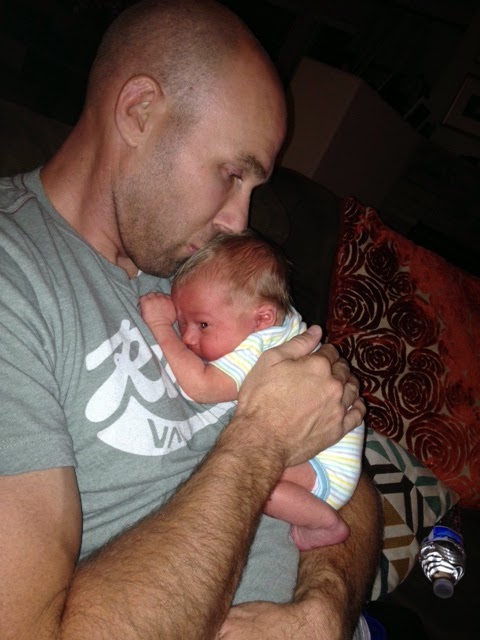 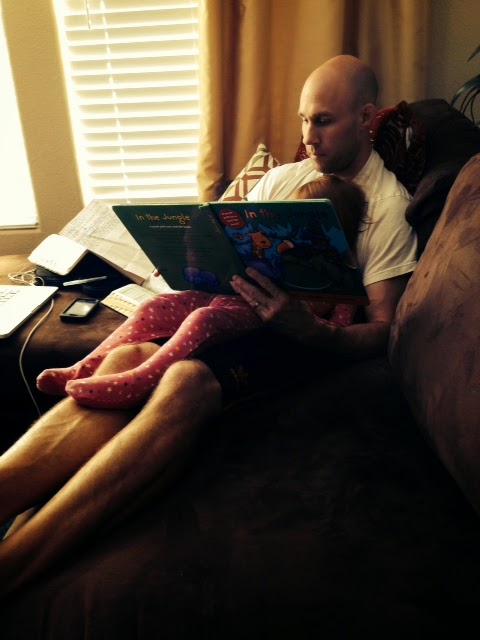 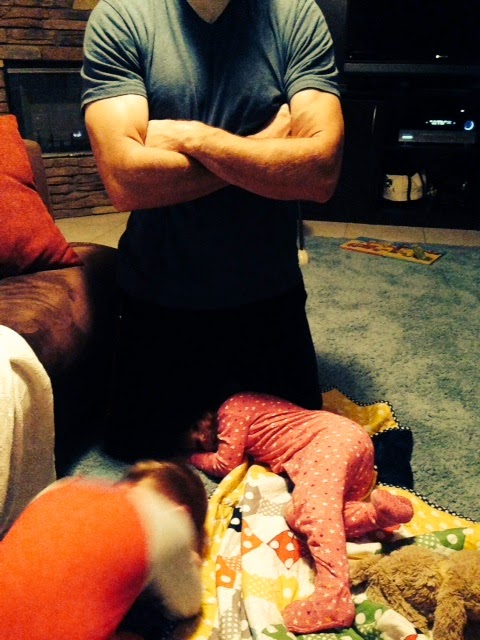 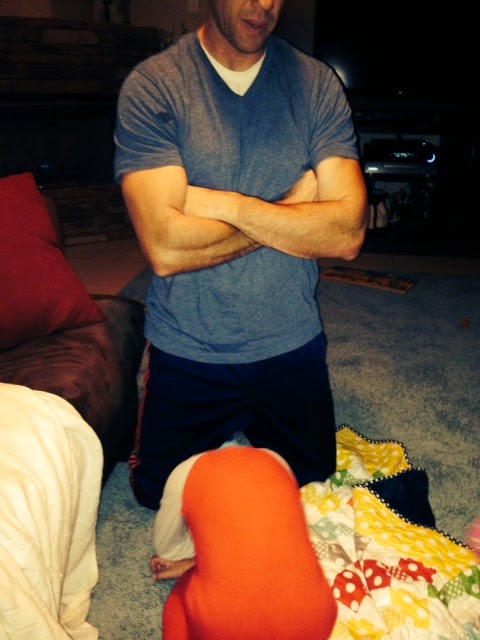 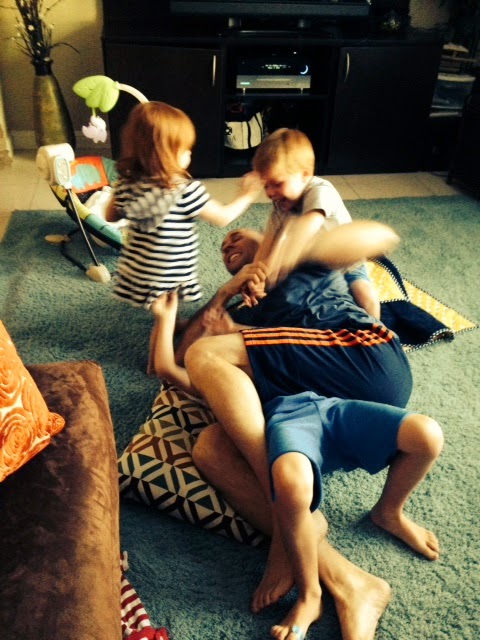 Baby Tom has had a few special visitors and a lot of fans. 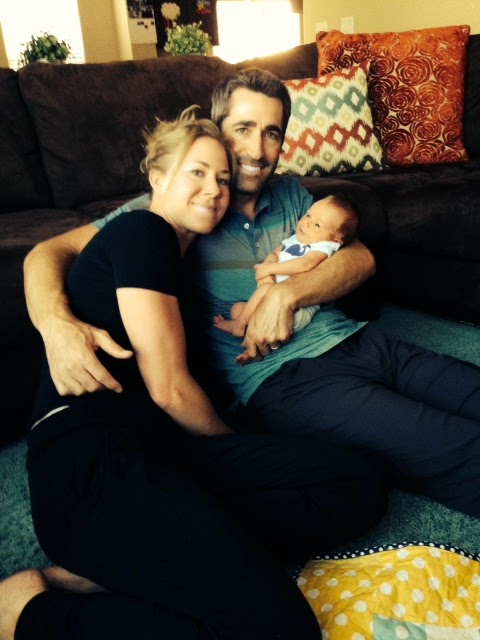 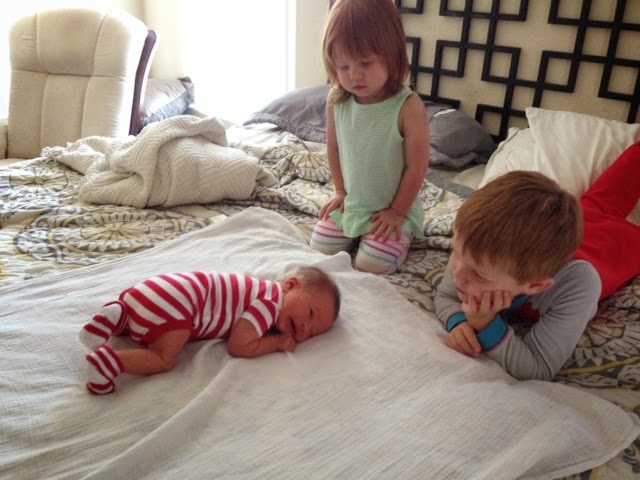 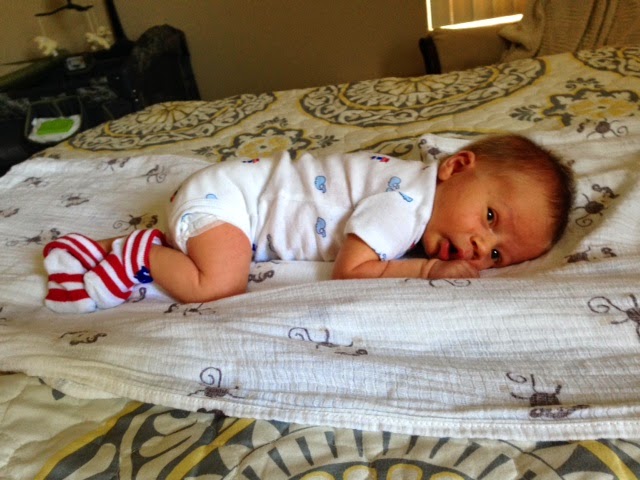 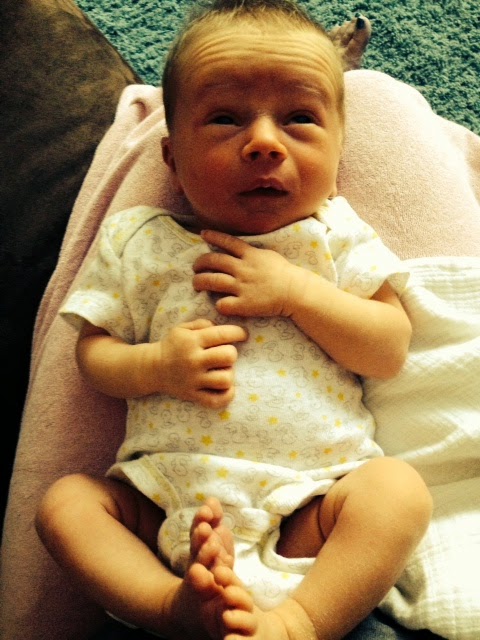 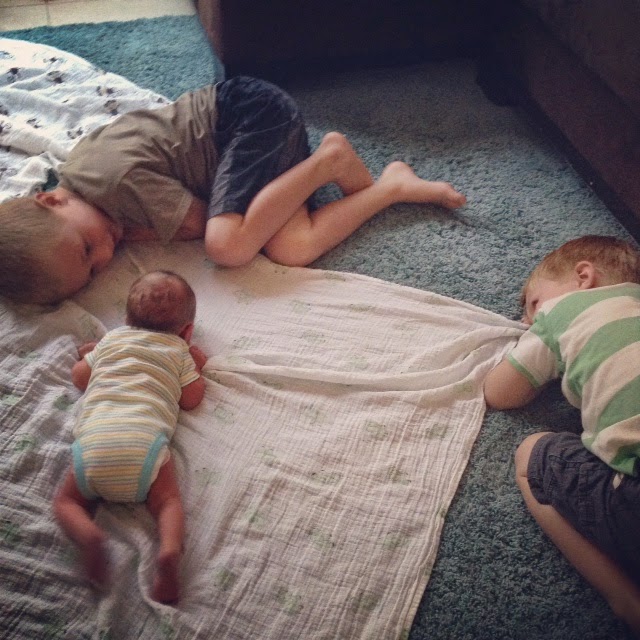 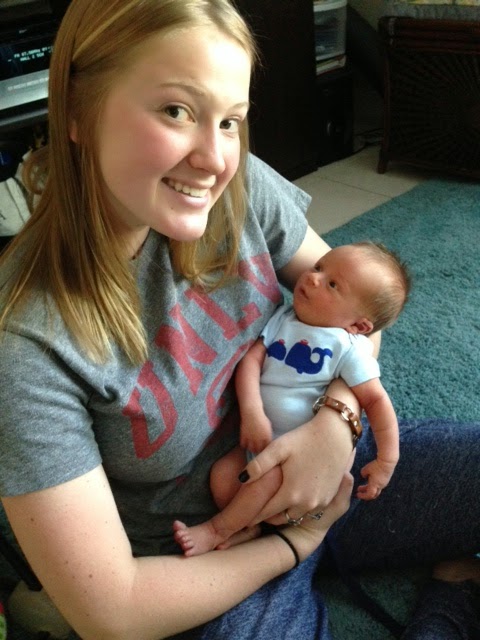 He looks a lot like Lennon as a newborn and has blonde tips -- very boy bandish.  Tod says he looks like Sting.  He's starting to open his eyes and look around.  Which he does so quickly it almost seems like he's paranoid someone's following him.
I am tired.  I have probably 10 people who have been calling that I need to call back (sorry).  I spend my time nursing and trying to get rest when I can.  This baby sleeps like a champ all day long then is wide eyed all night long.  After one sleepless night I started crying as the sun came up.  Huge tears of pure self pity.  I told Tod, "I have not slept all night.  I've tried everything." To which he replied half-awake, "Maybe you should try positive thinking," then rolled over back to sleep.
The kids love him.  Really, really love him.  I was worried about Ruby being jealous but so far she just talks about how cute Baby Tom is and asks to hold him and grabs diapers and wipes for me and asks if I'm ok when I cringe while nursing him.  She is my girl.

And the boys are good, same stuff as usual.  The other night I threw all three into the shower at once.  Left for a minute to grab towels and returned to have Lennon tell me he had a confession.

Me: What.
Him: I was just standing here and then I sort of pooped a little.
Me: Where.
Him: Well, it's up there (pointing to the top of the glass wall of the shower).
Me: How did it get up there.
Him: I don't know...
Me: YOU DON'T KNOW?
Him: No.
Me: Well I'm the only one who can reach it so it looks like I'll be cleaning it up.
Him: Maybe we can think of another way to get it down.
Larry: I know!  Let's go grab a broom!

So I left to get some paper towels and when I returned, the poo was gone.  Lennon was washing Ruby's hair.

Me: What happened to the poo?
Lennon: Oh I used this (my loofah) to get it down then used my hand to get it to the drain.


Welcome Baby Thomas Q.  I wish you the best of luck.
Posted by MediocreMama at 2:44 PM

Baby Tom is super cute! Congratulations. Thank goodness you got a girl in the mix, can you imagine four boys?! I can't wait to read your future four kid posts. It's a wonderful, crazy journey.

I love your posts! Welcome to the 4 kids club. Congrats on the baby, he looks darling.

Bahaha!!! I think Lenon may grow to be the kind of dad that pees on his wife's nursing bra. But at least heall probably use her loofa to dig it out of the toilet. Love you guys!!

I just can't even get over the poop story. soooo hilarious! and baby tom is adorable! I cant wait to meet him! Holly you're amazing! Move to utah so you can send the others over to our place to hang out and give you a rest. Or maybe we should just come there. way better weather. Some day...