The first thing I want to say is that I don't hate Canada OR Canadians.  I am slightly bitter that they took two of our best friends almost five years ago.  Otherwise, I find their country to be odd but pleasant.  People in Canada are nice.  Polite.  Even if you rear ended someone in Canada, they'd probably apologize and ask if YOU were okay.

I also want to say that when I entered my plane's terminal to leave Las Vegas, I was already in Canada.  Everyone seated around me looked like they were about to duck hunt...in 1985.  It was like traveling back in time and to some wooded area where people wore camo hats and a lot of Ed Hardy t-shirts.  I may have even seen a couple Stussy and No Fear logos.

Upon landing in Canada I was taken even further back in time.  Now we're in my birth year of 1981 or maybe even before.  Where am I supposed to go?  I have no clue because there is NO ONE WORKING IN THE AIRPORT.  The only employees I encountered were the ones sitting behind their glass in Customs who made me feel and act like a liar when asking why I was entering their country.

Them: So, what brings you to Calgary?
Me: My best friend's birthday.
Them: Huh...seems like a big trip to take in the middle of winter for a birthday, eh?
Me: Yeah...well she's a really, really great friend. 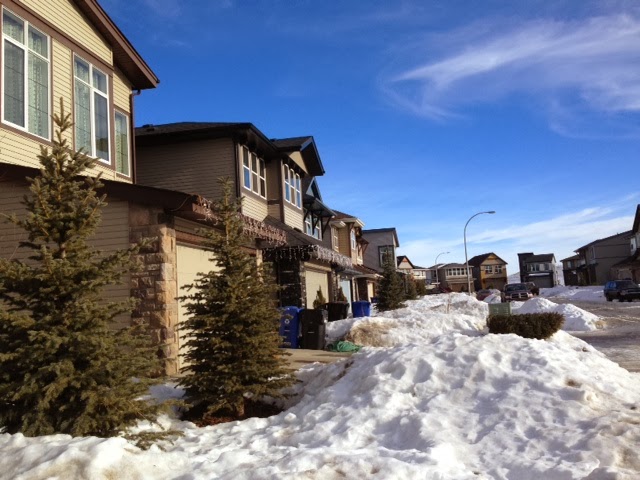 I woke up to this view.  Megan's street is like an icy obstacle course.  I grew up in the snow but this was extreme.  And I was told I visited during a warm front. 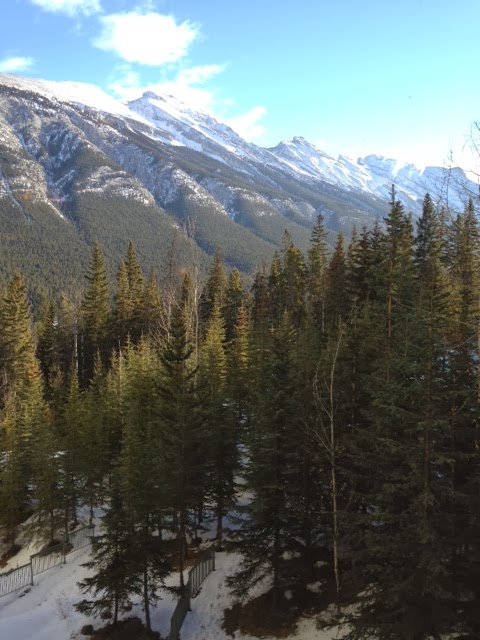 Clayton planned a weekend for us in Banff.  Pictures don't even come close -- it was breathtaking. 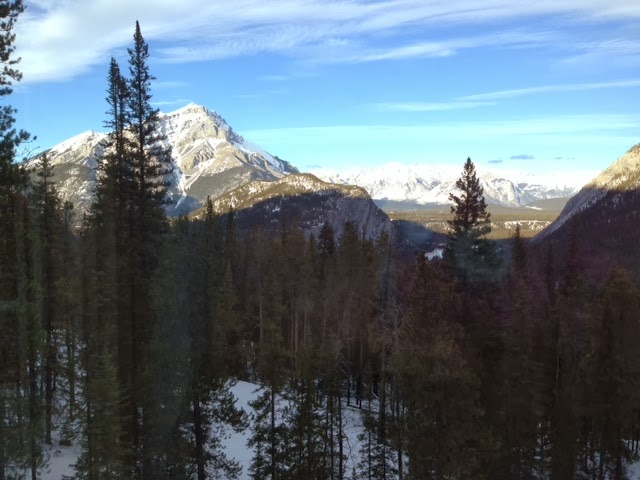 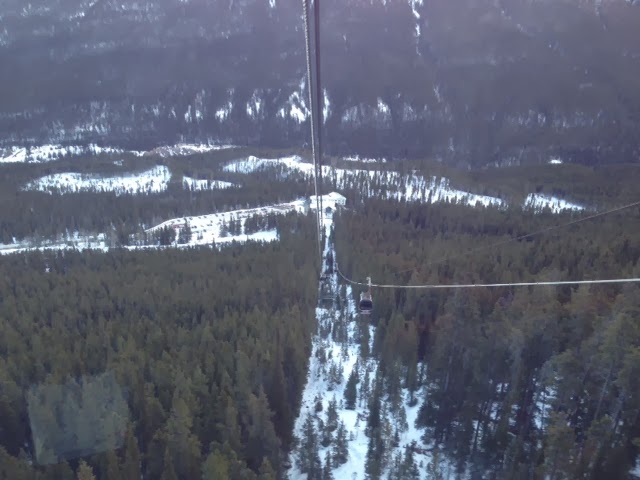 And of course Megan suggested that we take the gondola ride that is way too high for way too long.  If you know me you know that I was peeing in my pants, scared out of my mind, saying prayers and goodbyes to my kids... 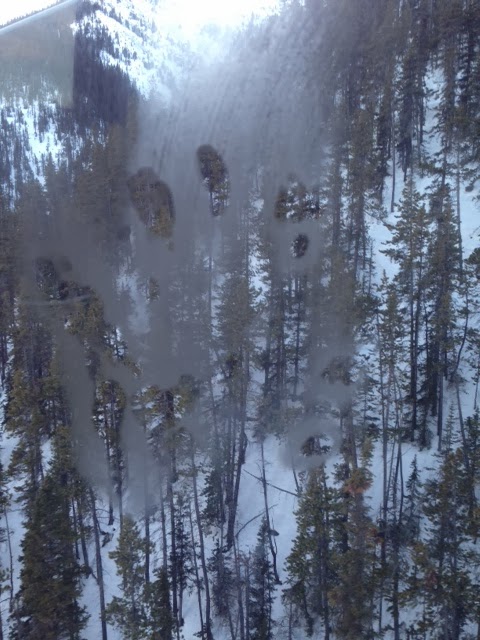 My sweaty handprint on the glass. 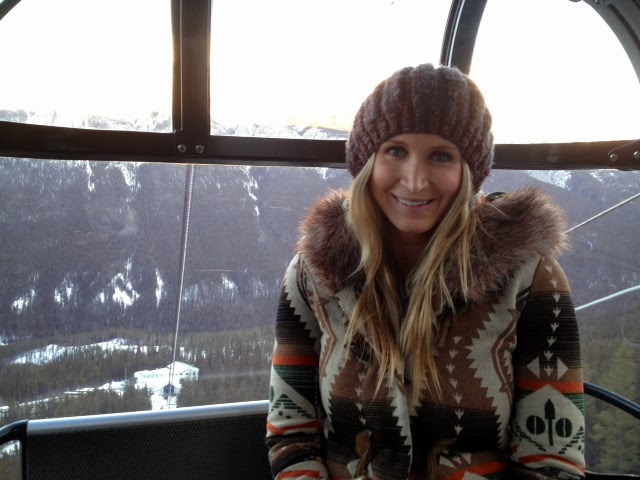 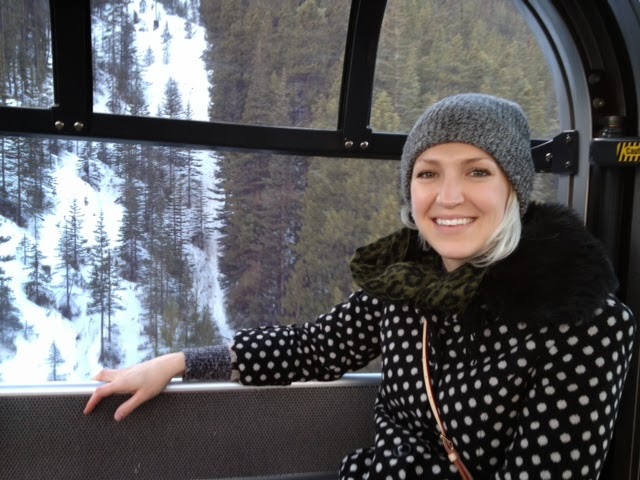 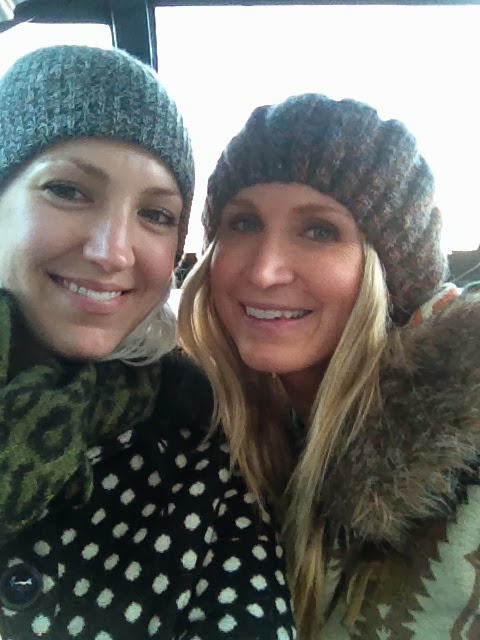 I was all about individual pictures but then Megan decided to COME TO MY SIDE OF THE GONDOLA for a picture of us both.  I only smiled so she'd go back to her bench and even out the weight again.  We're lucky we didn't tip over completely. 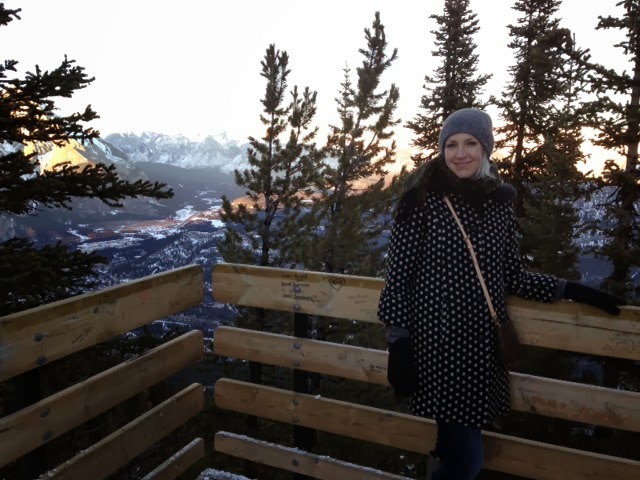 View at the top 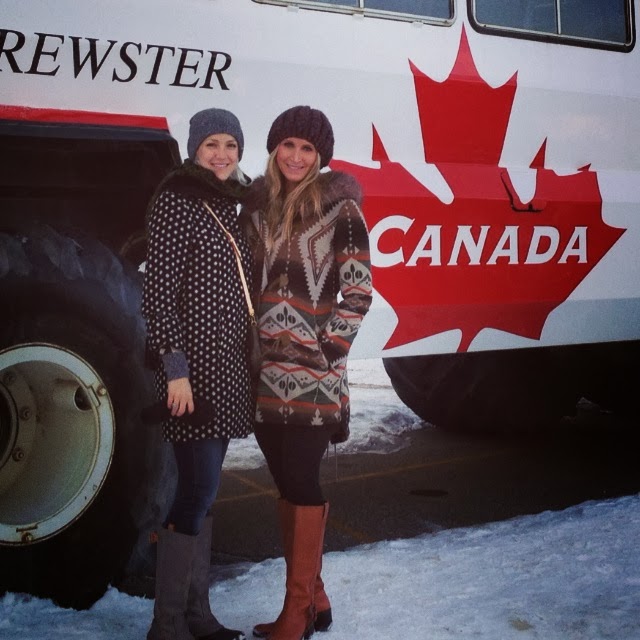 Who knows who rode one of these on their first dates?
Another note: In Canada, you have OUTDOOR shoes and INDOOR shoes.  You wear outdoor shoes to get in and out of your car, drop off your kids, etc...once you enter a building, you pull out the indoor shoes and change.  I was so exhausted by the end of it all.  Coats and hats and gloves and boots and indoor/outdoor shoes... 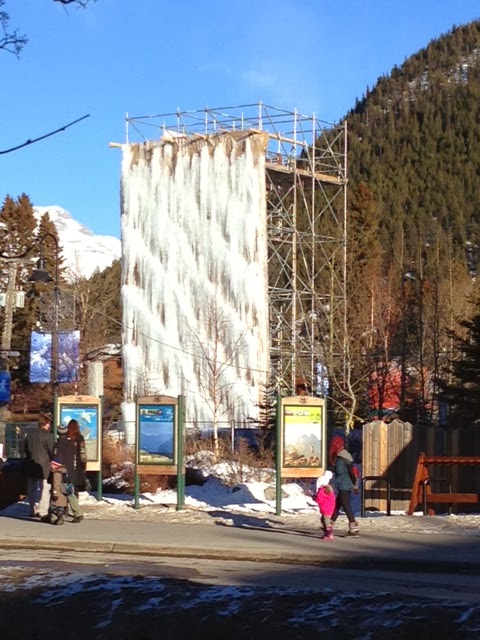 Canadians don't rock climb...they ice pick up walls like this.  And kids don't throw footballs around, they ice skate and play ice hockey all day long.
Canadians also don't live to impress each other.  The most refreshing part of my visit was seeing how simple life is up there.  People live in regular houses, drive regular cars and wear regular clothes.  The rich have houses next door to middle class families and people aren't caught up in name brands and designer labels.
I didn't see one Range Rover.  Sometimes in Vegas I'm sitting at a stop light between two Range Rovers and I ask myself what planet I'm on.  It becomes silly.  In Canada it seemed as though people worked to earn a living but spent most of their energy and focus on their families. Even though their Grammy's are a bit of a joke, their accents are weird and all their celebrities have to come here to get famous...I think they have it right.
Not pictured:
The date Clayton took us on to the best Italian restaurant in downtown Calgary.
Their adorable three kids whom I was sad to leave.
Watching free healthcare in action -- flu shots at zero cost.
I've said it before but I'll say it again -- Megan and I are friends because we are not the same.  We can argue over anything or convince each other of most things too.  During lunch I was expressing my concern for our country and the decline of family values and Megan said I sounded like Bill O'Reilly.  She makes me laugh.
Thank you Petersons.  I loved visiting your icy arctic tundra.  Next time come to the desert.  All you'll need are flip flops.
Posted by MediocreMama at 10:14 PM

Wow! That looks like so so much fun… except for the frigid part but what a great weekend to spend with such a great friend :) I'm thinking Canada might not be too bad at all.