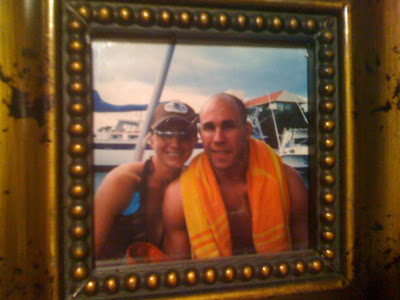 A week ago...
Me: Our anniversary is coming up; are you feeling the seven year itch yet?
Tod: "It's more like a burn."

Originally I thought he meant his heart was burning until he later explained burn as "the stage after the itch...it's worse."
Dear Tod,
Remember seven years ago when we got married?  Remember that morning when you ironed your shirt and almost burned a hole in it?  Remember how we pulled up to the temple and you asked, "Should we flip a u-ey?" and we both sort of laughed but in a really scared way?

Thank you for another year.  Thank you for being really funny.  Thanks for that one time a couple weeks ago when we argued the entire drive to the movie theatre over which route was faster.  You thought that one freeway was fastest while I knew that one street would take us right there.  Thanks for being willing to clock both routes at midnight that night.  And thanks for not being too mad that my way was much faster.  Good sport.

Speaking of movies, thanks for hating Inception.  Remember when the entire world told us it was the best movie ever and we sat there wanting to die?  As in, literally, when they started wearing snow suits and running around on a mountain I wanted someone to pull out a gun and just put it to my head.  I left to get some air and when I came back I asked what I'd missed.  Your reply?  "Ohhhhhhhhh...it's just too deep." Haha it's easy to make fun of dreams within dreams....within more dreams.

You're the best guy I know.  Love, Holly

Posted by MediocreMama at 12:00 AM

it might itch and burn but i can't think of anyone else i'd rather scratch it with.
p.s. your way is not faster, it's the same...

HAPPY ANNIVERSARY!!! You guys give me hope for happy marriage - love you!