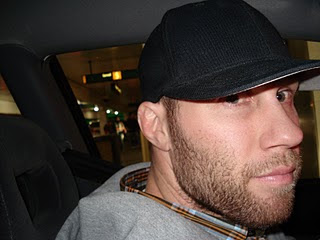 Yesterday was Tod's 32nd birthday. We had a great time. I won't bore you with details but I will tell you what he did two days ago.

After church on Sunday we walked out of the building and as usual, Lennon ran away from us. I've started wearing flats to church for this reason alone. So I chased him down into some sharp bushes and grabbed him by the wrists. This is when he bit me on the hand as hard as he could. With other people nearby, I calmly (but in a scary voice) whispered in his ear, "DID YOU JUST BITE MEEEEEE? YOU ARE GOING STRAIGHT TO TIME OUT AS SOON AS WE GET HOME AND NO STORIES BEFORE YOUR NAP!" to which he started wailing. We drove home.


As soon as we walked in the door, I put him in his time out chair and told him not to move until I came back to get him. The wailing began again. I went back into the kitchen and started making lunch when I noticed -- sudden silence. I peeked my head around the corner and what did I see? Tod -- juggling oranges -- for Lennon's time out entertainment. Lennon was completely thrilled. I heard myself say to Tod, "NOOOOOOOOOOOOO TIME-OUT ENTERTAINMENT!" and took the oranges. He quickly grabbed a few more and continued.

And so my life goes.

I have employed the quiet but scary voice on a few occasions myself. It's so scary it usually does the trick by itself.

Not gonna lie--I bet you have the best scary calm voice ever. Tod is cool. I can't wait for the blag post. One dayI'll have something cool enough to blag about and everyone will be jealous. For now I'm already jealous of yours and hope it involves money.

so, tod loved my beard so much from brent's wedding that he decided to grow one of his own. who can blame him?

So sorry Holly. I had to laugh at the orange juggling story though. He never fails to amuse! Be kind... LOL (you poor thing)

Wups! I see Evan's been on my computer again...that last comment was from Grandma Carol. But Evan probably would have been amused too. (His daddy had a biting issue as well.) I think you handled the situation just right, by the way! Can you spank a grown man?