Blag posts are funny because we all hate reading them (or we love making fun of them). However, when you do something that REEEEEEEAALLLLY deserves a blag post then I say go for it. I make no apologies for blagging today because hell froze over on December 6th when my sister in law Amy, my friend Angela and I ran the Las Vegas Rock N Roll Marathon. Kelli, here's the "blow by blow" that you requested. The rest of you can read it or move onto a boring blag post...

In college I met Jodi. She and I roomed together for two years. She ran marathons and I ran two miles on the treadmill. On a good day. She swore I'd run a marathon someday and I promised her I would not.
---------
After Lennon was born, the three of us ran a half marathon. I mentioned to Amy that maybe someday we'd run a marathon to which we laughed and said no way would we ever do one except maybe we will.
---------
One day while I was huge and pregnant with Larry, Amy and I agreed to run a marathon after he was born. We decided this really, REALLY late one night when all logic had already gone to bed. It became a personal goal for me -- not even for weight loss but instead for sanity. Running makes me feel so much happier with my boys and with Tod. It brings positive thoughts into my head instead of negative ones. It makes stressful situations much more manageable. 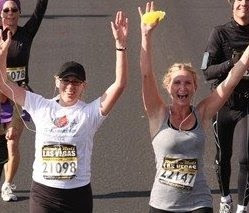 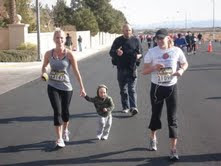 [ Mile 19 -- I got to run with my boyfriend for a minute. He literally thought he was in the race. ] 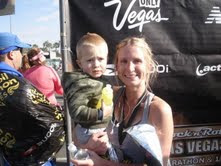 So fastforward to the day before the race. If you don't know Amy, you're missing out. This girl sat on my couch the night before the marathon and explained to me how Ibuprofen increases the chances of death during a marathon. I had just taken four of them. I went to bed at 10 with visions of cardiac arrest dancing in my head. And did we fall asleep at 10? No. Larry was teething and fussed/cried/screamed until around 1 am. No big deal -- we had to get up at 4 am so I figured three hours of sleep was PLENTY... 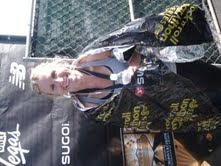 RACE MORNING: Freezing. The three of us tried keeping warm as the first runners crossed the starting line. There were live bands, fireworks, and suddenly I became excited to run 26.2 miles.
---------
MILES 1-6: The first six miles passed so quickly. When I saw that we'd hit mile six, it felt like we'd been running for 15 minutes. I started thinking I was born for this. These feelings quickly slipped away around mile eight when I decided I didn't want to run anymore. People say this all the time but it is 100% true: IT'S ALL IN YOUR MIND. At mile eight my legs felt heavy all the sudden and I just started having thoughts of sitting/laying/crawling/walking...anything but running. This is when I got a text from Tod saying they were waiting for us at mile 13. So I kept moving. 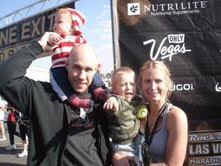 MILE 13: Tod, Kevin and my two boys were cheering for us. It was such a huge lift. However, people who are NOT participating in a marathon should never utter words like, "Look, you only have 13 more miles to go!" because guess what? THAT IS A LONG WAYS TO RUN. Good intentions, good intentions.
---------
MILES 11-19: Steady climb up Decatur then Hacienda. This (for me) was the hardest stretch of the race. The uphill was not steep but it just made everything seem a little harder than usual. I knew at mile 19 we'd get to turn around and head for the finish line so I kept going. Tod and the boys were at mile 19 so we dumped all our jackets/gloves on them and headed back toward the strip.
---------
MILE 20: My hands were freezing so I found a pair of gloves someone threw on the side of the road and put them on. Shamelessly put them on and felt like a genius wearing someone else's sick, snaggly gloves.
---------
MILES 20-26.2: People warned us about these last six miles. That we'd hit walls. That they were the worst. That it was all mental at that point. All these things were true. Before the race I read an article that suggested dedicating each of those last six miles to people you care about. You spend the entire mile thinking of them -- memories/how they've influenced you, etc... I did that. And it saved me. I had flashbacks of my dad teaching me how to rollerskate (I'm totally serious). I remembered the time my boyfriend broke up with me in high school so my mom took me shopping for a new dress. I thought of my three siblings and our vacations, holidays and even hard times together. I dedicated a mile to my best friend Alana. We have been through it all -- from preschool to present. I recalled the birth of both Lennon and Larry and then how they're growing up right in front of me everyday. Mile 26 was dedicated to Tod and I really lost it. I thought back to 1999 when I first met him at Ricks College library where I worked. He'd lost his disk and convinced me to break into my boss' office to look for it. I thought of the four years spent as good friends then the night he took me on our first date. I remembered his teary proposal and even tearier (real word?) wedding day. I remembered him holding two newborn boys, two years apart, and then I remembered his hug at mile 19 when he told me (good intentions), "Only have SEVEN miles left! SO EASY!" By the time we were running towards the finish line I had tears running down my face. It was probably a mixture of gratitude, shock, and temporary insanity.

[Angela, me and Amy after the race.]

POST RACE: I baked for a week and ate a solid diet of total crap. I walked down my stairs backwards for three days and iced my aching ankle and knees. I experienced what I call postmarathondepression where I started wondering what to do with my extra time. I called Amy and we discussed half ironman races and how no way will we EVER do one except maybe we will this summer. . . .

Posted by MediocreMama at 8:21 PM

Email ThisBlogThis!Share to TwitterShare to FacebookShare to Pinterest
Labels: blagging '09, I ran a freaking marathon, miracles

OK no seriously. You are amazing! We have babies who are the same age and I'm still using that as an excuse to only run two miles on a good day. WOW.

This is something I've always wanted to do... Thanks for the inspiration.

PS What kind of shoes do you run in?

Congrats, marathoner! You are the bees knees! The bomb.com! I'm thrilled for you and I'm glad someone told you if you walk downstairs backwards after a distance race that your life will be so much happier. :)

Dear Holly,
You are my hero. PERIOD.
Seriously.
Maybe some day I will drive to your marathon and watch you, wishing it was me, but it won't be, cause thats just effing crazy! LOL!!!
LOVE YOU and congrats.

ok, you are the hard core one! i have been waiting for this post. you are awesome!

i you have to do a marathon, the rock n roll is the way to go.

i was going to do the rock n roll in san diego when i graduated from college, but things got crazy and now there is no way!

there is a rock n roll here in phoenix, but i would only do a half...in a really great year!

so proud of you! xo

Love the blow by blow...thanks! And especially love the idea of dedicating one mile to a different person. That may have to be a few people per mile for me because of a short attention span, but great idea! And, I think you can totally do a 1/2 ironman! I've done one and it was really hard, but you get to do 3 things for hours on end instead of only 1! Congrats on 26.2!!

Wow. I want to be you when I grow up! Congratulations!

You inspire me. For real. I am beyond proud of you and so happy. what a huge accomplishment. I can't even imagine. You are for real. Good job and maybe one day we will run one together.... :)

I've already congratulated you girls and told you how proud I am of you both. But today, reading your blog, my heart was touched & you made me cry. I love you Holly!

You are Super Woman. Thank you for the play-by-play. I loved it.

HollY!!! I AM SOOO PROUD OF YOU!!! I am so touched you dedicated a mile to me - I can't tell you how thankful I am to have you in my life! What an accomplishment BLAG away :)I would!!!

Congratulations for achieving something totally awesome. What a great way to end the year.

OK, so that was really cool. Even though I have zero desire to run a marathon....ever, I really do admire you for setting your goal and following through. That must have felt amazing.
It was really great to see you guys. I am totally having Larry withdrawals, and tell Lennon that I totally forgive him for spitting on my new jeans. Have a great New Years and score the sh*t out of that scrabble board.

Holly you are seriously so awesome! I really need to get some advice from you. I just signed up for my first marathon in May. This blog actually made me kind of excited! Congrats!

This was so inspiring and brought tears to my eyes. Great job, Hol!

Diana, I really like New Balance shoes for running. I went to a Fleet Foot and they did all these tests on me to find a good fit for my step. If you go for it, I'd say good shoes are key.