Four weeks ago I was waiting for Lennon to get home from school.
Instead there was a knock at my door.
Lennon rides to and from school with a neighborhood posse of boys.  Jack is one of them.  I opened the door:
Jack: Lennon just crashed on his bike! He's really hurt!
Me: Hmmmm...is he bleeding?
Jack: No...
Me: Can he walk?
Jack: I think so.
Me: Tell him to walk home.  Thanks Jack.
Five minutes later he still wasn't home so I threw the kids in the car and drove around the corner until saw Lennon being escorted by about 10 kids home.  He was screaming.
If you don't know Lennon, here's a little breakdown.  The kid is smart, athletic, confident, and reeeeeaaaalllllly dramatic.  He must get that from his father.
Me: Lennon, are you okay?  What hurts?
Lennon: My arms!!
Me: Can you bend your wrists?  Wiggle your fingers?
Lennon: Yes...
Me: You'll be okay.
That night he settled down, watched a movie, ate dinner, went to bed.  Woke up the next morning wanting to ride his scooter to school.  However, he was holding his arms weird.  He cringed if anything bumped them and couldn't do simple things like pull a car door shut.
Me: Tod, I think we need to get some x-rays.
Tod: Holly...I've broken a lot of bones.  If his arm was broken, he'd be screaming.
I think 20 people told me this. Tod said it every single day for a week.
So for six days, my firstborn child took a scooter to school.  Did his homework.  Jumped on the trampoline.  Even did chores.
In fact, the morning I took him to the doctor I told him to pick up his Legos and fold some towels before school.
Lennon: But Mom...it hurts my arms!
Me: Seriously, Lennon...towels?  Legos?  Come on.  Hurry up.
I finally took him in because of my trusty neighbor Theresa.  She's raising four boys and knows broken bones.  She told me Lennon probably broke something.  I took him in.
He didn't have a broken bone!  He had two. 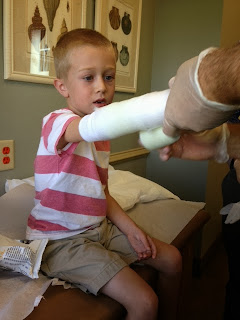 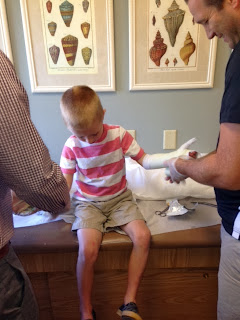 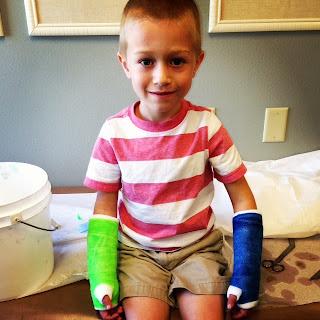 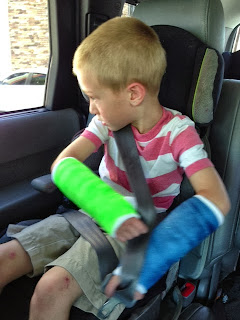 The first thing we learned about two broken arms: Seatbelts are hard. 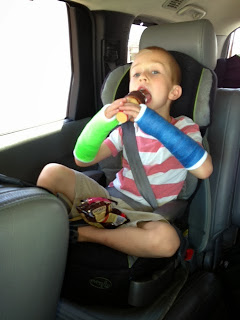 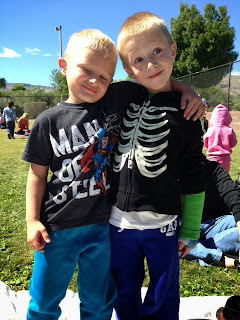 The next day another lesson: You can no longer button or zip up pants.  Sweats to school for four weeks.  Other challenges include: using scissors, using pens/pencils, holding a fork or spoon, drinking from a cup, putting on shirts, taking off shirts, buttoning shirts, squeezing toothpaste onto a toothbrush, bathing yourself, opening doors, closing car doors, using remote controls, washing your hands, and my favorite -- wiping your own bum.  Not to mention all the fun stuff: No trampoline, no bikes, no scooters, no slides, no recess, no P.E. 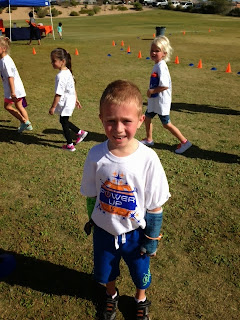 Lennon is pretty amazing.  He's become very self sufficient despite two broken arms.  He can do most of the above now on his own.  He rarely complains.  Loves the attention from girls at school ("Hey Mom, a bunch of girls who never talked to me before want to be my friend now!").  Even ran in the Fun Run at school today -- 35 laps. 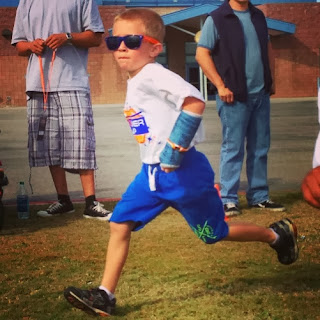 He even did them in sunglasses which I thought was a nice touch.
Only 14 more days to go.
Posted by MediocreMama at 6:59 PM

Go Lennon! What a stud. I am so proud of him. I miss those kids way too much.

Your neighbors should have CPS on their speed dial. ;)
This will be a story that will be told forever. I love it!

I believe it was Tod (but possibly T.J.) who got "slam dunked" by Jimmy Ellis at a Boy Scout meeting and wound up with two broken arms. Poor Lennon ... it sucks for sure! (but at least he's making some new "friends" ... girls, that is.) ha ha
Please tell him we're proud he's so tough ... always knew he was a Super Hero!!

Pretty much my favorite story yet. You sound a lot like my mom did when I broke my arm. He's the best.