are we there yet

Summer starts out exciting.  No more school!  No more schedules!  No more picking up/dropping off!  Let's party!
In the beginning, everything is fun.  Pool is fun, library is fun, packing up for trips is fun, even going to the gym with kids is fun.
For them.
Weeks pass, trips come and go and in the end...days become years.  I feel like June flew by, July disappeared, and it's now been August for 10 years.  I turned 42 mid-August.
It's too hot to go to the park.  It's too hot for my boys to ride their bikes in the evenings.  It's so hot my power bill was over $400 last month.
Don't tell Tod.
August in Vegas is comparable to maybe March in Minnesota or Utah.  Our winter has been long and it's almost over...but actually, September is just as hot.  And where it's cold, it'll probably snow in April.
Did anyone follow that.
The new school year means early to bed, early to rise.  It means separating the older two so they can be friends and not frenemies.  It means only taking one or two kids to Costco instead of ALL THREE EVERY WEEK.  It means looking forward to them coming home and hearing all about their day.
Because I really, really do love them.  But I've had three kids home for 18 months and it's time to shake things up.  And send some away.
I even feel like I'm running out of chores.  This morning I was making stuff up for them to do.
"Lennon, spray all these baseboards and wipe them down...then doorknobs..."
"Larry, go find some towels to fold and then scrub the couch with a rag..."
???


Last week I requested a family night lesson on fighting.  So Tod told the kids about peacemakers and he taught the boys to say, "Whoa, whoa man, I'm a peacemaker..." whenever a confrontation began.
This actually caused more fights because Lennon started doing it just to bug Larry and Larry would start screaming for him to stop so Lennon would do it again to avoid a fight. 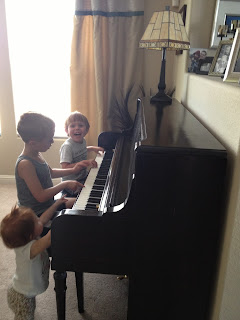 I also made the mistake of purchasing a piano during this 10 year long August.  I'm already annoyed and want someone to come take it away.
The new rule: You can't play it unless you know how to play an entire song.  Any song.  Let me know. 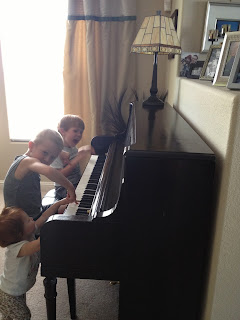 Tod always tells me that I have a good life and can't complain.  I agree; I have a good life.  A great life.  But I will never, ever apologize for complaining about the last two weeks of August before school starts.  School clothes are purchased, school supplies are already in backpacks.  We just need August 26th to get here.

I think I'll make a chain.

Posted by MediocreMama at 3:16 PM

and that is why it is awesome that schools in AZ start at the beginning of August!

I would love to see Tod's FHEs.

So glad Larry is taking an interest in personal hygiene.