still pregnant.
Pregnant enough for Tod to blame hormones on our Enchilada Argument Monday night but not pregnant enough to have a baby outside my body yet.  What's an Enchilada Argument?  You know...it's when you're nine months pregnant but still manage to make dinner only to hear your husband remind you that he likes that other enchilada recipe better so you tell him he has no manners so he tells you not to be so sensitive then he reminds you how he doesn't really like enchiladas that much ("I'm not really a sauce guy") and you tell him when someone makes you dinner just say thank you.
I'm just getting over that conversation today. 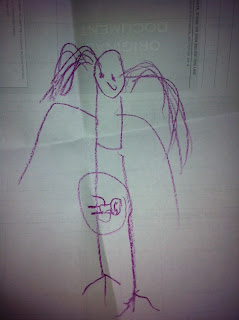 The good thing about Enchilada Arguments is that your four year old draws  ten million pictures with visible baby in utero to cheer you up.  You should see the ones where he includes boobs.
still pregnant.
pregnant enough for my four year old to step it up.  Like on Tuesday when I was in the shower and Lennon came running in screaming, "Larry pooooooooped in the yaaaaaaaaaarrrrrrrrdddddd!" so I tell him ok ok I'm getting out but once I made my way downstairs Lennon informed me, "Don't worry Mom.  The poop is gone."  So I carefully asked, "Where did it go?" and he explained, "I used a fork and put it in the sink." I asked in horror, "Which sink" which is when he told me, "You knowwwww...the one where you wash all the dishes?  I took care of it." 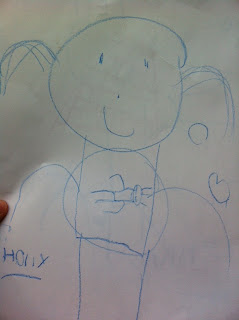 The good news: He put the fork in the sink.  Poop in the trash. 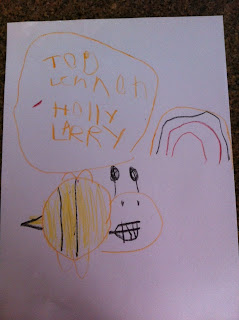 still pregnant.
Starting to worry about Tod in the delivery room.  In the past he's made some mistakes like when I had been in labor at home for 12 hours and wanted to leave for the hospital.  It seemed he had a few things around the house he wanted to tend to first so I started getting enraged which was when he told me (and my mom), "Holly, calm down.  People have babies everyday."
Later that day I kicked him out of the hospital room for texting and asking during contractions if it "hurt real bad."
Don't hate Tod.  There's more to the story but today we're sticking to my side.
Because I'm still pregnant.
baby on friday.  we seem super ready to add to this chaos.
Posted by MediocreMama at 4:26 PM

Email ThisBlogThis!Share to TwitterShare to FacebookShare to Pinterest
Labels: I'm having a baby this week

I just love everything about this post, first of all my husband is the EXACT same with dinner. I think he came up with the saying "I'm not a sauce guy" lol so I know how that goes. I get mad when he says it on A normal night, but if I were pregnant I KNOW it would be a fight! Haha also after I have birth (like 30 minutes after) we were talking about pushing and all that fun and my husband pipes in and says "well I was there and it didn't look like it hurt THAT bad" ummmmmm seriously??!? Haha so...... Good luck girl! You know what they say third time is a charm....? Haha

I kind of feel bad for laughing at this......being a fellow woman and all...but hilarious. Good luck with the whole expelling a human from your body thing.


(Yeah- I have no children. Is it that obvious?)

Tod,
I remember saying a few silly things when I was young too. As your seminary teacher, I see you (and all of us men) need a quick refresher course: Life, and pregancy in particular, are not all about you. You are fortunate the Lord has blessed you with a great wife and children. It is wonderful to see that your family is healthy and happy.
Hugs and Kisses
Alan.