who wants to hear a sad story

Tod: I want to take the boys to a Monster Truck show this weekend.

So Friday came and I spent the entire day telling the boys there was BIG SURPRISE that night.  That Dad was taking them somewhere REALLY COOL and they were going to FREAK OUT when they got there.  In fact, I even convinced them both to nap so they could stay out late with Dad and their big surprise.  They waited for him by the door.

The funny part of the story came as Tod loaded the boys in the car that night.  I was on the couch with my book...excited for an evening of solitude and quiet.

Tod: Honey are you sad you're not coming? 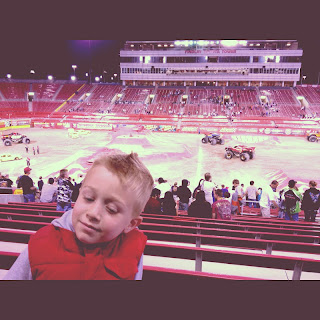 About an hour later Tod sent me some pictures.  Look at them, having so much fun!  I loved seeing the boys in a huge stadium doing boy stuff.  They deserved a fun night with Dad after a long week home with a sick, huge mom. 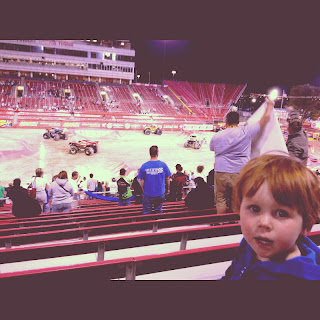 However, when they returned around 10 that night, Lennon couldn't spew out the real story fast enough:
Lennon's version:
Mom, Dad totally messed up.  The show started at 5 and he thought it started at 7 so we got there and everyone was leaving so we saw the trucks but they weren't moving so then Dad made us leave and took us to see the Lorax.
Tod's version:
NO WHERE did I ever see 5 pm as the start time.  And when we got there at 7 there were fireworks going off so I thought the show was just beginning.  But people kept pouring out of the stadium and I thought huh that's weird.  And when we walked up to the usher no one tried to get tickets from us so I thought, Cool, free Monster Truck show!  Then there were plenty of empty seats on the 50 yard line and I thought, Sweet, this is going to be awesome!  But we sat there for awhile and people kept leaving and the trucks weren't moving so eventually I put two and two together...we missed the show but didn't miss the traffic trying to get home which was cool...
The saddest part was that night as I kissed Lennon goodnight.  I told him how lucky he was to go out with Dad and see a movie.  His response:
I just really, really wanted to see those trucks move.
Maybe next time buddy.  Maybe next time.﻿
Posted by MediocreMama at 4:36 PM

Email ThisBlogThis!Share to TwitterShare to FacebookShare to Pinterest
Labels: Classic Tod, the boys

poor boys... but glad it didn't ruin your night!