Last night I started dozing off around 11:30 until Tod began this conversation:

Tod: Britney Spears' video, "Oops I Did It Again" is such a joke.

Tod: I saw it yesterday at the gym.  What was the big deal about her anyway?

Me: Well, people liked that red catsuit I guess.

Tod: She looked stupid in it.

Me: Maybe it was cooler in the 90s.  Goodnight.


[ 30 seconds of silence ]
Tod: Yeah, maybe it's because I'm older now but that video was so stupid. She was doing all these movements (simulating dance moves)... What are those lyrics even about?

Me: Well, she's saying "Oops I did it again" like "Shoot I just broke your heart again...sorry, I'm not that innocent." 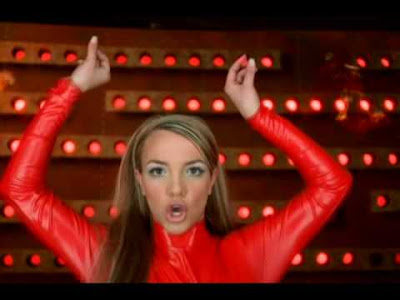 [ maybe 10 seconds of silence? ]
Tod: She is so trashy now.  Not attractive at all.
Me: Sigggggghhhhhhh.
Tod: So washed up.  And who can take her seriously with a name like 'Britney....Spears'?  Just her name alone makes her lose all credibility.  Like Hi, My name is BRIIIITNEEEY SPEEEARS.  Ugh.
Me: Totally.
Tod: Look at Madonna.  That name worked in the 80s, 90s, and now.  And all her ages....her 20s, her 30s, her 50s!  Or Cher...look at that name...she should've gone for something like JLo did...BSpears?  Or what about B.S.!  Hahahahahahahaha can you imagine if she went with B.S.!
Me: Tod.
Tod: What.
Me: Stop talking.
Tod: Why?
Posted by MediocreMama at 8:50 PM

Nothing is debateable about the Hit Me Baby One more time video when we were in high school. Hottest girl ever. It was down hill after that. Well actually most of her videos pre baby and crack were hot-trashy now. I know nothing about Cher other than she looks like this one specific breed of dog and I have always hated Madonna mainly because I thought she worshipped Satan. But I do love that Tod was passionate about this subject and can never tell if he is really having this conversations or joking...