This Sunday (Mother's Day) marks one year since my dad died.  I've been thinking about him a lot.  Instead of mourning his death, I want to celebrate the life he lived.  This week's posts and music are for him.  These songs reminds me of road trips in our van, my dad paying bills at the dining room table on Saturdays, and concerts together.

Which reminds me of my first story.

After my dad inititally got sick in 1997, he was bed ridden for a long time.  After about six months or so his strength started to return.  I surprised him with tickets to a Billy Joel concert and he was ecstatic.  When the day came, I started worrying about getting him up and down stadium stairs, making him stand for too long or just wearing him out altogether.  I was wrong.  He walked himself from the car parked blocks from the stadium, slowly made his way up the steep steps to our seats and stood for the entire concert. Whenever I hear Billy Joel I picture my dad, who we almost lost, standing next to me smiling towards the stage.

This picture was taken right before we left the house that night. 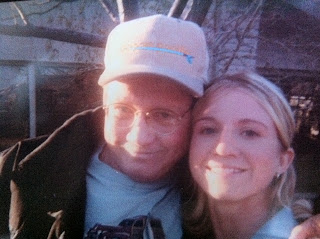 Posted by MediocreMama at 6:28 PM

Email ThisBlogThis!Share to TwitterShare to FacebookShare to Pinterest
Labels: Dad

you are a sweet daughter. I love this picture.

Your dad was a special man, what a nice tribute to him.

I'm enjoying your dad's songs ... he'll never be forgotten. I think he's looking down and smiling.

I think it is so great to celebrate your dad, and all the fun memories of him. He sounds like he was such a fun and fantastic dad:)