my cover is blown

While I've spent the last four years making fun of my husband via blog, he has allowed the abuse in silence.  Then I turned 30 on Sunday and he crept from the shadows, surprising me with that post.  Raise your hand if you believe I'm headed straight to hell...

Although, Tod knows how I feel.  I omit the gushy and sweet on my blog for entertainment purposes.  I don't have to announce every compliment, flower, date night and surprise on my blog.  That's for us.

But I will say this once: My decision to marry Tod is the best one I've made.

It's not because Tod is a perfect person.  And it's not because he thinks I'm perfect, either.  It's because we are each other's best possible match.
Marriage is fragile.  I've seen strong ones disintegrate without much warning.  I have several divorced friends who wonder what they were thinking the first time.  It often stems back to not choosing their very best possible match originally.

I dated several different guys before Tod.  All of them with different qualities that appealed to me.  In the end though, I couldn't picture myself laughing with them at a dinner party 20 years down the road.  I couldn't imagine laying next to them at night talking about nothing in the dark.  I wanted someone who knew I was ready to leave a party without me having to say so.  My future with them never.felt.quite.right.  Something was always a little off or missing. 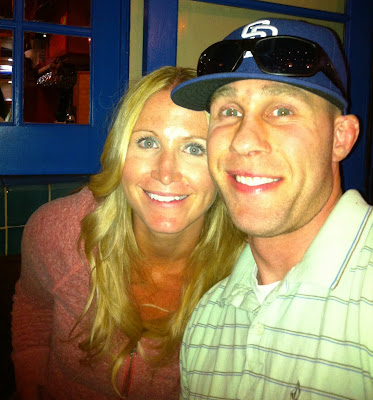 When Tod and I started dating it felt like a puzzle coming together; two very different pieces with jagged edges that together made a perfect fit.  Nothing was off.  It was natural and peaceful. The longer we're together, the more cohesive the pieces become.  It's easy because we had the right two pieces to work with from the beginning.   Which is the best way to start because life is hard.  When there's no money or crappy jobs or abusive business partners or disabilities or broken down cars or screaming kids during dinner... you'd better be super into whoever you come home to.  Otherwise, where's the light?
Is anyone still reading this?
I don't plan to divulge all the thoughtful, kind, genuine things Tod says and does on a daily basis.  But I will, this one time, admit...he is the best person in my life.  I could not have done better.
Speaking of the best, the other day we grabbed lunch.  While eating he asked me if I had any frenemies.  What?  I almost choked on my burrito. In the same breath he commented that my new feather earrings looked like they came from a Chesapeake Mallard or the like.  And as we left, he took someone's business card out of the "FREE LUNCH DRAWING!" bucket and wrote a phone number on it for later use.
And...I'm back.
Posted by MediocreMama at 8:30 PM

Email ThisBlogThis!Share to TwitterShare to FacebookShare to Pinterest
Labels: TOD

Great post. I too feel like I found my most perfect match. That, is a good feeling.

I love it! So sweet and real. And that's good.

First off-if you were ever at a party and wanted to leave you'd let Tod or anyone know before he came to that conclusion. One of the many reasons I think you're great. Two I recall meeting you in the BYU creamery while waiting in line (I regretfully was wearing a pink polo with the collar popped-I am sorry). You were in tears because your finace was in Texas for the summer and, "it just wasn't right". I could tell you were in love and Tod is the man. That being said, you totally had frenemies...maybe still do? Blog about it. Great couple. Great people. Great friends.

Great post. I agree. When life is hard you better be able to come home to someone who you are really into. You guys are PERFECT for each other. :)