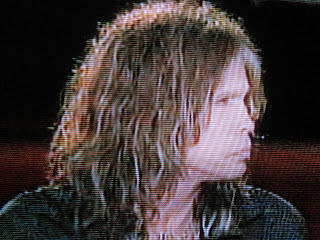 Tod and I decided that not only do we like Steven Tyler but we think he looks like a cracked-out, older version of Larry.  It's his beady eyes and that caveman profile. 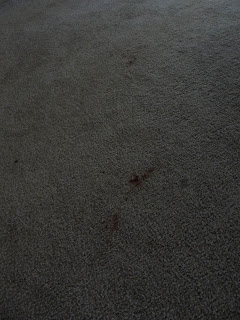 Three new lipstick stains on my carpet.  And yes by saying new I'm implying there have been others. 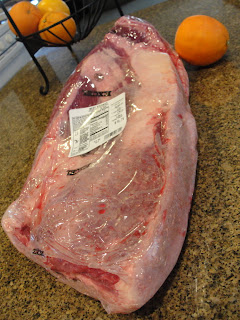 I cooked the biggest piece of meat in the history of man.  Recipe HERE. 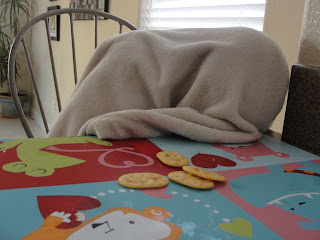 Lennon decided he needed to eat with his blanket over his head for an entire day.  It was a lot of fun. 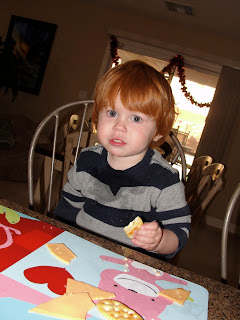 Larry decided he is done with high chairs and likes to live dangerously to the literal edge of his new barstool.  Why don't they make straps that adjust to any barstool?  And is it me or does he look like a boy and not a baby anymore?  I sort of thought Larry would stay a baby and only Lennon would grow older. 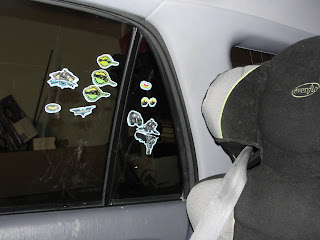 We pulled into the garage after an hour of errands and I found this: Batman stickers not just stuck to my windows but glued.  My church bag was next to Lennon in the backseat so he sniffed out some supplies and got busy.  We are so ghetto.  Tod will die when he sees this. 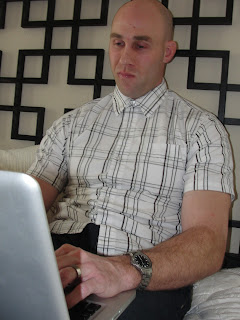 Speaking of Tod, I found him working like this the other day.  I asked him why he was wearing a shirt two sizes too small with it buttoned all the way up.  He claims I shrunk the shirt and he's trying to fix the collar.  I'm a big advocate of TELLING the person who does your laundry if something SHOULDN'T  be dried, but what do I know. 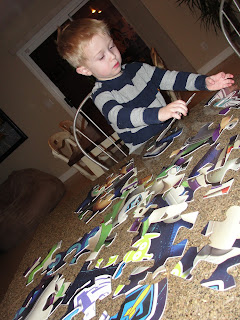 Lennon did this puzzle maybe a thousand times.  Thank you Grandma Carol and Papa Rick. 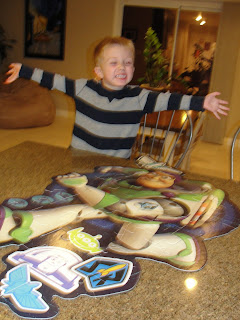 Also Lennon's been having frequent nightmares.  He'll wake up screaming then run into our room to tell us all about it:
"Mom, there was a witch and she kept touching my shoulder!"
"Dad, there was a cat who punched me wight in the face!"
"Guys, I dweamed there was a stwanger who gwabbed me and took me away from you!"
So Tod has taught Lennon how to fight a cat ("One punch in the gut, one punch to the jaw, pull the whiskers and then throw it by its tail") and told him the next time there's a stranger in his dreams to introduce him to his two uncles (holding up both fists): "Ka" and "Pow."
Posted by MediocreMama at 10:25 PM

Email ThisBlogThis!Share to TwitterShare to FacebookShare to Pinterest
Labels: All three boys

I needed this post. It brought a smile to my face. Is there ever a dull moment in your house?

can i just say that i love your family?! my husband would kill me if i posted a pic like that of him, but i so totally would! can i eat with a blanket over my head all day? i could seriously use a day of not looking at anything!

Holly, why are you rubbing your lips on the floor anyways :) My youngest has fallen off the bar stool many times. Maybe we should both look into a Tie Chair, have you seen those? They look handy.

Loved this blog. CONGRATS Lennon ... you Puzzle Master, you!! My son is a funny guy ... glad you have a good sense of humor, Holly. Rick still shrinks my things in the dryer if he pulls them out of washer first ... after all these years we're still fighting about "Pleeease don't dry my stuff!"
Some things will never change.

You can improvise w/the barstool. Just strap him in around his waist (through the bars in back of stool) with either a belt or one of Tod's old ties. It works.