My baby's not a baby

Lennon started preschool this week.  Zero tears were shed by both mother and son.  I was happy for him to hang out with other kids and excited to have time alone with Larry.  Plus, Lennon likes making friends. Seriously, this kid is social.  His teacher told me he stood at the door and introduced himself to everyone with a hug and asked, "What's your name?  Wanna be my friend?"  So innocent and uninhibited.  It's too bad adults can't be the same way. 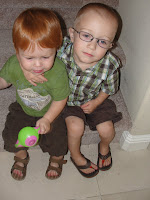 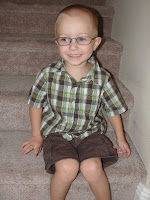 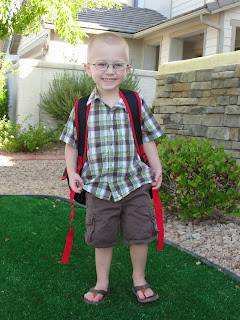 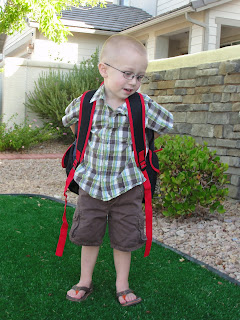 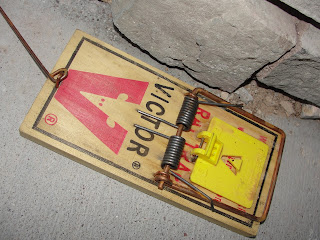 So I took these pictures before he left for school.  I sort of felt pressure to do a front door shot or a picture of him holding a sign saying how old he was and what year of school he was starting.  Instead I took these.  Now I wish I'd taken them next to the rat trap that almost broke Lennon's fingers last week.  The one I warned him about repeatedly that he decided to touch while doing yard work with Tod.  The one he touched but pulled away from with only a slap, not a trap.  Once again, my baby's not a baby.  Who can say their three year old has escaped both death by rat poison and broken fingers by rat trap?

Hey, come to think of it...both of those happened in Tod's care.  Weird.
Posted by MediocreMama at 7:13 PM

I'm ready for the school stories to begin.

Here's a song to teach your kids "I am IRON man":
"I am ICE Cream Man.
Running over fat kids in my van,
they want ICE Cream Cones
all they're going to get is Broken bones."
Courtesy of my 2nd grader. He didn't learn it from his dad (This time anyway) this one came from school. Oh the wonderful and educational things they learn from their fathers and school.
I dare you to sing it 5 times and then try and get it out of your head, let me know how that goes for ya!
Hey- if you're ever back home let's get together.

He just looks so cute and smart. Like a little grown up kid with those glasses.

I already typed up my 'first day of school photo card' for Monet to hold up in all the pictures. Am I still allowed to use it?

Yes Megan. Use it. At least one of us isn't a lazy mom.

when a kid spits on another kid the first day of preschool, you know he didn't learn it at school. maybe nursery? sunbeams?

He looks so studious in those glasses. Let's pray he doesn't decide to go #2 on the story time mat.