Tod saw advertisements for the circus a few weeks ago so we told the boys.
Us: The circus is coming to town.
Them: Can we go? Can we go?!
Us: Well...how much money do you have?
Them: -----
Us: If you do extra chores everyday until then, we'll think about it.
They did, so we went.  Those poor boys were like circus slaves for two weeks. 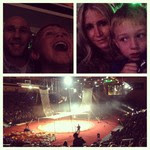 The day of the show was sort of bad timing.  Lennon had woken up early that morning for an all day wrestling tournament and was wasted.  I think this is clear from both pictures of him.  Oh and these were taken around 10 pm.  I felt like I was abusing my kids. 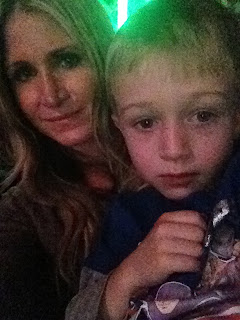 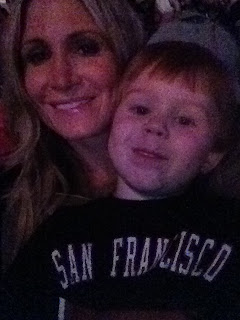 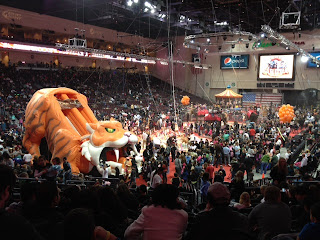 And then the main attraction -- the intermission around 11 pm where the arena fills with booths and a huge tiger slide and face painting and balloons and every kid sits in the stands watching other kids have fun.  Our boys just stared as all the lucky kids watched their parents shell out more cash for a pony ride.  A 10 second pony ride, ps.

Lennon: So, can we go down there?
Tod: Well...we can walk down there but all of that costs extra money.
Lennon: Don't you have any more money?
Tod: Nope...we spent it all just to come here.
Lennon: Well then why are all those kids down there?
Tod: Those are rich kids.  You guys are poor kids.  Poor kids are lucky just to be at the circus.

Maybe more chores next time.
Posted by MediocreMama at 6:04 PM