who can I hire to do this for me next time

I decided to potty train Larry in November.  I remembered that Lennon potty trained quickly but still took months to become independent at it. It's hard enough taking Larry to every public restroom in this city; the last thing I need is a huge, heavy, crappy carseat in tow as well.  So we did it. 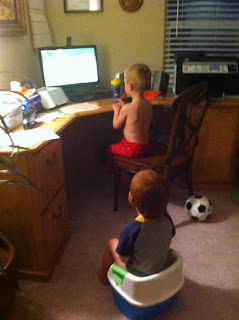 I've never been a fan of pull ups or taking six months for a kid to slowly learn to use the potty.  We took his diaper off in November and he hasn't worn one since.  This method is great in many ways but requires a lot of patience and involves a lot of accidents.  Most days I felt like a zoo keeper...wiping up pee, scooping up poop, sanitizing and repeating.  I HATE POTTY TRAINING.  When we started, Larry's favorite thing was to sit on a toilet for 20 minutes with nothing, just to have me take him off, start my grocery shopping, then pee everywhere.  Or decide that Barnes and Noble was the best place to have a diarrhea attack in the Biography aisle.  The worst part was I still had to make my purchase...mortifying.

Good news: He's gotten better each week.  In fact, it's rare he has an accident now.  However, we are part of a babysitting co-op group.  Four couples who take turns watching all the kids on Saturday night so the others can go out minus paying for a babysitter.  One particular family is so nice.  They are just NICE.  Their house is so clean, and they are so sweet to everyone, and their house is so clean.  This is where Larry has chosen to poop on the floor.  Twice.  The first time (last month) we figured it was a fluke...apologized profusely, talked to Larry about it, moved on.  Then on Saturday night we dropped them off and I broke my own rule about ZERO PULL UPS just to save them the trouble in case he did it again.  Oh he did it again.  But pulled his pants down first.  I am not kidding when I say I wanted to die when we found out.  I asked Tod to dig a hole for me to crawl into but he just kept driving instead.  Why Larry.  Why. 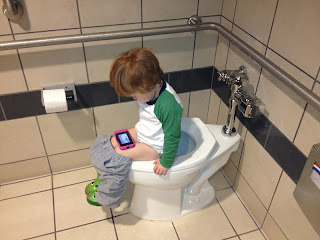 Although his accidents are not exclusive to their house.  Just this morning Larry decided that playing with his trains was more important than going to the bathroom and we soon heard Lennon screaming, "LARRY POOOOOOPED HIS PAAAAAAAANTS!"  So I sent Tod.

Our conversations have evolved so much over the last nine years.  We used to talk about our future together.  We talked about the kind of family we wanted, how the other person was so perfect and how could we be so lucky to have found each other?

Me: How bad was it?
Tod: Not toooo bad...it wasn't rock hard but it was sort of gooey.
Me: Okay, okay enough.
Tod: Gooey's not the word.  I'd say the consistency was comparable to peanut butter with a little flour mixed in.
Me: OKKKKAAAAY stop!
Tod: Peanut butter, flour, then I'd guess maybe a tablespoon of water?  It was somewhat grainy yet runny.

I hate potty training.
Posted by MediocreMama at 2:24 PM

Email ThisBlogThis!Share to TwitterShare to FacebookShare to Pinterest
Labels: potty training, Tod makes me dry heave while I brush my teeth

First I would like to say thank you for the little bit of snot that shot out of my nose when I tried to stifle my laughter as I read this post since my boss is all of 20 feet away from me. Serves me right for blog surfing at work.
Secondly, please let me know when Larry has mastered potty training so we can have you over for dinner again. We miss you all, but I'm afraid I would miss my clean floors even more.

Bahahhahahah! Holly, you wouldn't survive our house. Here, we photograph particularly "good" poops from our potty training kids to text to each other.
Maybe on kid number five, you'll be as rich as Ryan's parents were and just have the nanny potty train your kids like how Ryan was. Jealous? I am.

I wish I had read this post 2 weeks ago. I started potty training Madden and I swear I had no idea it was as bad as it really is. It sucks. Its been my least favorite part of motherhood so far. worse than pregnancy. worse than a c-section. worse than breast feeding. and i really did say out loud to my husband on day 2 that I was ready to pay someone else to come in and finish the job. good luck.