We spent this Thanksgiving at my mom's house.  And these pictures will probably look like everyone else's Thanksgiving pictures except one minor difference...we were sick.  As in coughing/puking/sore throat/chills/ache/NO APPETITE sick.  Most of our guests opted for another place to eat so it was just us.  Probably better that way. 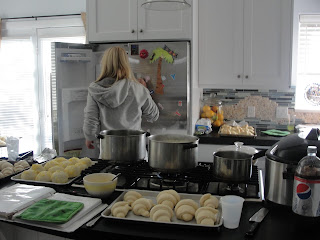 We cooked in my mom's new kitchen.  It is gorgeous.  Very classy, very modern, very her.  I pretended it was mine.  Above: the back of Kari's head. 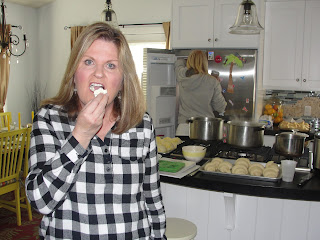 And there's my mom. 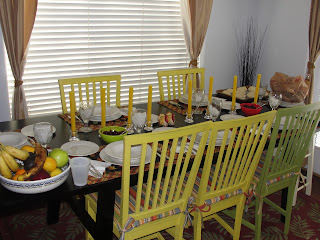 And here's the table. 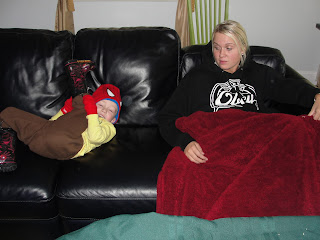 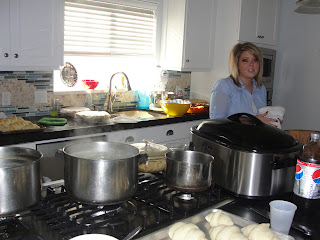 My new sister in law Shantay who was so helpful and didn't act grossed out at all about our health condition as we cooked.  Although she wasn't there when Kari was puking, then Larry was puking, then I almost puked cleaning up Larry's puke...either way she was a good sport.  Speaking of puke, clear this up for me please....a friend of ours says the word "puke" should not be used.  He says it's trashy.  "Vomit" is a more tasteful option.  Do you say puke?  Because I just typed it almost 10 times. 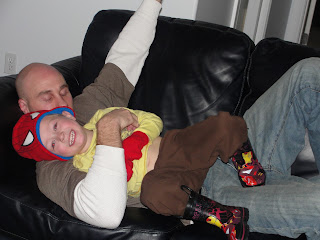 This is what they did while we cooked. Kari and me -- two sickos.  And this is us looking GOOOOOOD.  After we both finally showered and put on some makeup.  We really should have taken a before picture.  At one point my mom told me I looked awful and Kristi followed it up with, "Yeah, you look like death." 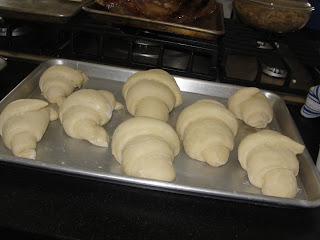 But I'm not going to lie...my rolls were good. 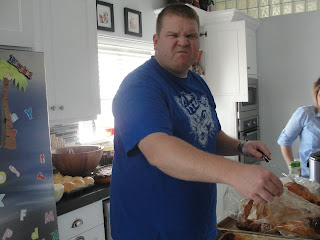 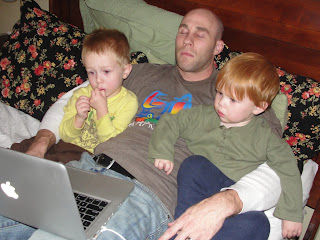 And here is what happened when we sent Tod away to put the boys down for a nap.  Every single time I tell you. 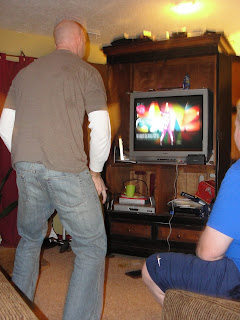 My mom bought a Wii with Just Dance.  Tod seemed skeptical at first however I'd say he won the Most Improved Dancer of the Weekend award. 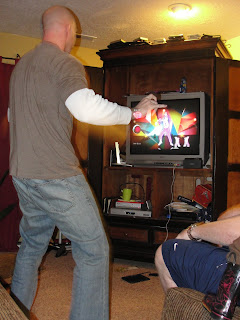 His improvement began after the hour spent alone........in the basement.......dancing.  Video footage available. 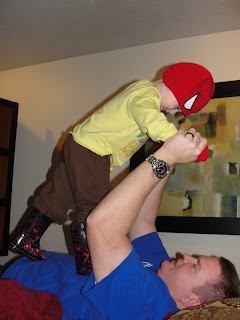 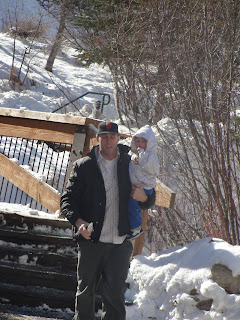 Afternoon in Sundance.  Is there a prettier place?  This is where Tod proposed to me -- right on those ski lifts in the background. 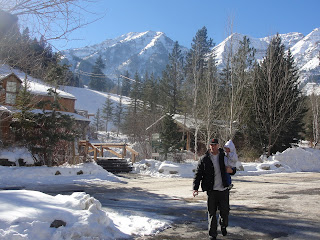 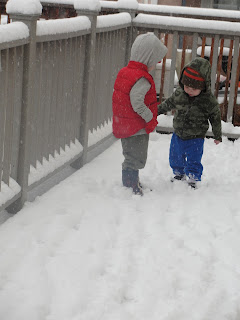 On Sunday we woke up to pack and drive home but we found all this outside: 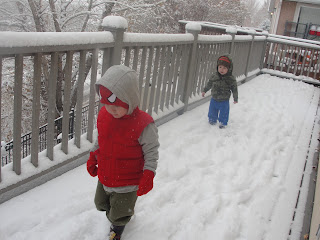 So we decided to wait it out.  The boys played outside while my husband built this inside. 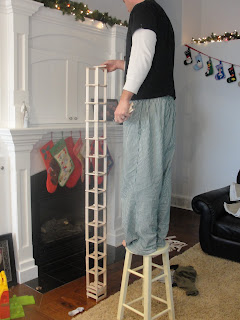 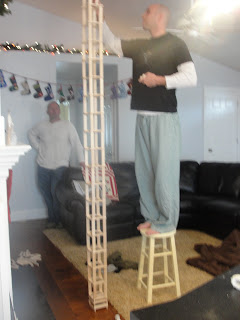 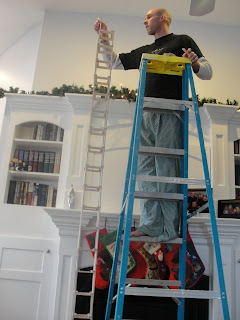 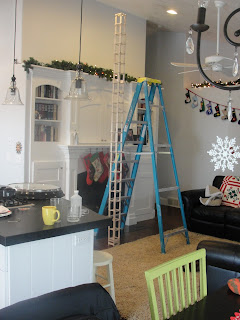 Final tower.  And he wanted to keep going but there were two problems 1. ceiling and 2. no more blocks.  I am tempted to get him a bag of blocks for Christmas. 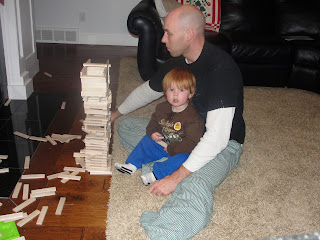 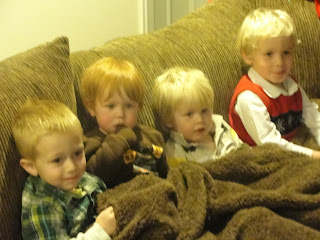 Something else worth noting: Within 36 hours of my mom's Wii purchase it stopped working.  We tried for an hour to get it going and...nothing.  Feeling disappointed and ready to demand her money back something inside me clicked.  I asked Lennon, "Honey, did you stick something inside that black box over there?"
His response: "What's gonna happen to my bum?"
Me: "Nothing will happen to your bum if you tell me the truth."
Len: "I put four pennies in there, it's not that bad."
Luckily my mom had a warrantee.  Thank you Sam's Club.
Coming soon: Never take Larry to the mall without a stroller and why I sometimes feel mad that I married a Food Princess.
Posted by MediocreMama at 10:02 PM

Email ThisBlogThis!Share to TwitterShare to FacebookShare to Pinterest
Labels: puke or vomit?, Thanksgiving 2010

I love the "what will happen to my bum?" He is hilarious! Love the pictures, thanksgiving was so much fun and I'm still craving orange rolls! Yummm! Thanks for all the great pictures!

Vomit sounds more repulsive to me than puke. Always has.
You're right, embarrassing stories about a husband really adds something to a blog! You are so wise. But now I'll have to start paying attention to J.

I love this post for so many reasons. First of all-I think your kid has the same issue as my nephew-you gave birth to a cartoon character. There is no way he is real. Second of all-we played Just Dance and I was extremely embarassed at first, but then I just got frustrated that I couldn't do it-and more frustrated when I had to do the Tik Tok Ke$ha song (yes I threw in the "$" sign-it's her name and I respect that). Lastly-vomiting is like the word penis. I hate when people you technical names-that's why we came up with other names-such as puke and weiner. However I do think the word pooing is gross. Poo=fine pooing=well it almost has a sound to it...that's all.

Ryan, Ke$ha's "Tic Toc" was my most frustrating dance as well. Although we really nailed that Jackson Five one.

I did pretty amazing on the Franz Ferdinan and Killer's. I now need to buy the Wii.

I look like death in that picture. That was pre-makeup for me, post-makeup for you. I'm glad you guys made it back safe.

We say puke. Nothing else sounds repulsive enough. Hopefully you're feeling better now!

I was hosting Q's parents for Thanksgiving and was up ALL night puking (that's right Q, I say puke and will never switch over to vomit no matter how trashy you think it sounds) the night before Thanksgiving. Thankfully I have June Cleaver as a monther in law and everything was made to perfection. I however had ZERO appetite and had to settle for left overs days later. Not at all the same.

Love your mom's new kitchen by the way.