Spelling Bee Champ Will Do 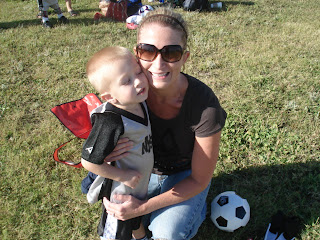 I never anticipated this but I am one of those parents.  One of those parents who wants their kid to be good at sports.  I admit it. Lennon's first soccer game was last week.  And he was tired.  As in stayingupwaytoolateandwakingupbeforethesun tired.  You know what that means.
The starting whistle blew and the kids started running.  Except Lennon.  He stood in the middle of the field crying with his hands on his hips.  And he kept crying...and crying...and crying.  He was that kid.  That kid bawling on the field without an injury. Before long they subbed him out and we asked what was wrong.  His response, "They're not using my ball!"  It was painful to watch. 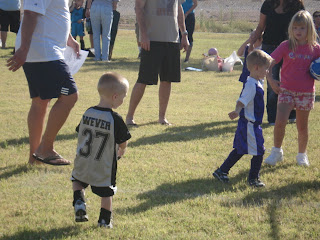 To make matters worse, the other team had this massive kid named Kevin who looked at least six years old and scored goal...after goal...after goal.  And each goal was accompanied by him high-fiving his dad who just nodded like, "Awww yeah that's my kid."  I think the score was Us: 0, Kevin: 20. 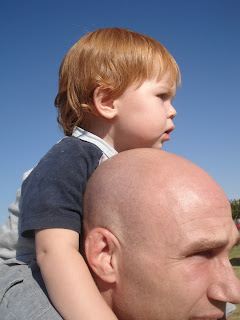 The game ended at last and Tod and I exchanged looks like, "Oh well, maybe he'll be good at science or something." 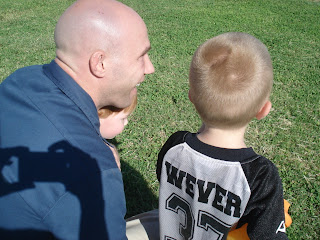 Email ThisBlogThis!Share to TwitterShare to FacebookShare to Pinterest
Labels: Lennon, No crying in soccer, Soccer games

At least he's not like our other nephew on the other (Clark) side who, rather than chase the ball, chases every other kid on the field and methodically knocks each one down with a vicious blindside forearm shiver. He's not a very good teammate. Lennon is, (picking flowers doesn't make the other kids bleed and cry), and that's something to be proud of.

Hailey was in soccer for at least 4 years before she stopped picking the grass and doing pirouettes (sp?) during the game, but she loves it now and is great at it. Don't give up on him just yet. You never know when one day it will just click for him. Plus, how cute is he in his little uni!

My husband is from Chile so the only sport he REALLY cares for is soccer. My son on the other hand is afraid of the other players and just follows the herd but NEVER gets in on the action. Currently he is a grave disappoint to his father.

My four-year-old, Asher, takes off his clothes, lays on the grass and yells, "Coach, when is it time for treats..."

Are you describing my kid's first soccer game? Sounds identical. He wouldn't kick the ball because it wasn't his and he just stood there. He is back in soccer again after a year or two hiatus and he is slightly better although he does just chase kids but at least he's running. I can't say all kids are like that, however, because my Eli is only on his 4th game ever and he is doing GREAT. My oldest, however, WILL be good at science and I am proud of him that way. It is actually fun when you have all boys to have them be so different. (plus when the oldest doesn't like sports at least we have a second chance!)