R-Ranch Part I: Driving with kids

My husband grew up camping at R-Ranch. It's on the California/Oregon border. They have fishing ponds, horseback riding, pools, rivers, snack shack...really fun. So we spent a week there over the 4th. What wasn't fun: The 16 hours it took to get there. Although I have to admit - - the boys were pretty dang good. But no one's perfect. 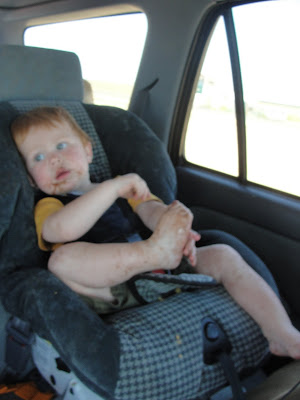 Larry and I snacked on chocolate covered pretzels for a few hours of the trip. This is what I couldn't see as I drove (see above). He was sucking the chocolate off his toes at one point (says Tod). Sorry to everyone. 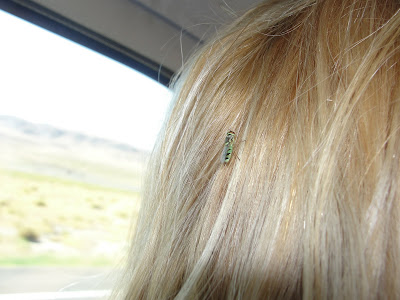 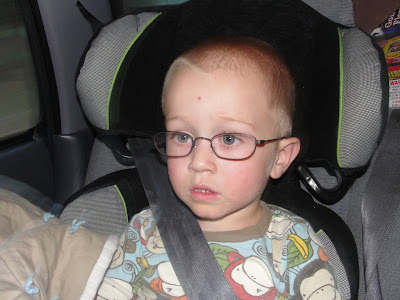 Thanks to my mom for the best gift I've ever been given...portable DVD players for the car. While the boys don't get to watch TV every time we drive somewhere, they DO get to sit mindlessly in front of Toy Story II four times in a row on any long road trip. Thank you Mom and thank you Pixar. 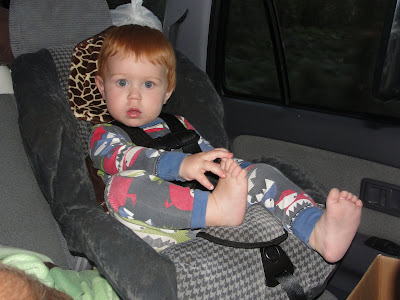 Look at this kid. He is so freaking good. However, notice the blanket he's sitting on. That's because around hour 13 we stopped for gas. I pulled Larry out of his seat and noticed gobs and gobs of peanut butter where he was sitting. After a second examination of the seat and then Larry's entire back plus my arm and (later discovered) my shirt I realized -- this was not peanut butter. This was the worst blowout I'd seen in my life. This blowout had two adults working damage control in a gas station parking lot. Tod held Larry by his hands while I ransacked the car for wipes. I yelled at Tod, "I CAN'T FIND THE WIPES, WHERE DID YOU PUT THEM?" which is when he yelled back, "THEY'RE BY MY SEAT!!" to which I yelled back louder, "NO THEY'RE NOT!" which is when Tod shouted, "HOW BIG IS THE CAR? FIND THEM!!!" This is all funny now, not then. Tod dangled Larry while I stripped him then attempted to wipe him clean. It was not working. So Tod, being the confident guy he is, dangled his naked son -- covered in peanut butter-like feces -- into the gas station to clean him in the bathroom. Only snag: long line for the bathroom. Meanwhile, Lennon had climbed into some lady's convertible to pet her dogs. 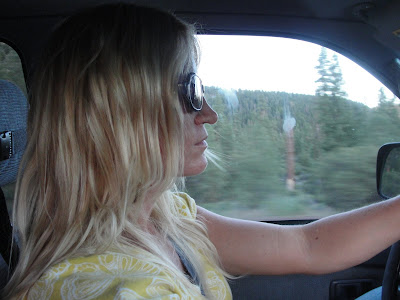 Here I am driving around hour 15 when Tod commented that "something stinks." I agreed and prayed Larry hadn't had another episode. Then Tod went, "Ewwwwww!" and pointed under my right arm at a huge stain I didn't see back at the gas station. I was covered in poo. This is when Tod told me to lift my arm and proceeded to clean it off while I tried not to swerve off the road. I'm extremely ticklish and anytime he came near me with that wipe I lost it. Thankfully the stain only spread and became worse-smelling once he'd wiped it "clean." Do I look amused to you? 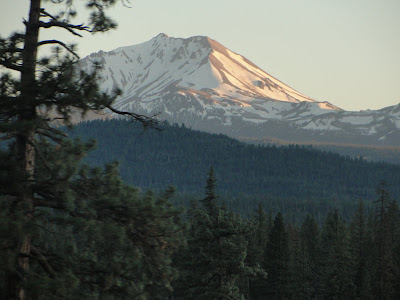 But the view was breathtaking. 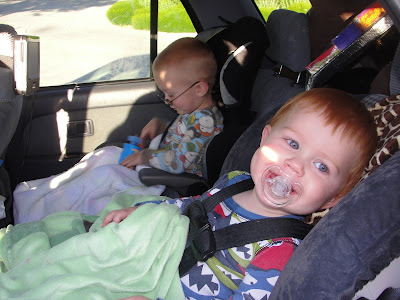 The boys at a rest stop post-blowout. Larry looks relieved. 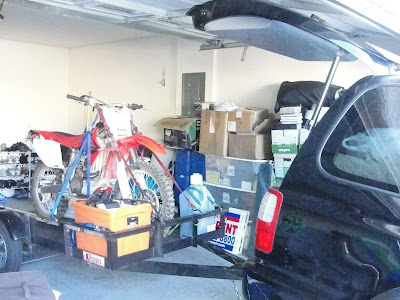 I hauled this thing the entire way. Which means no faster than 70 mph. Which meant more family-car-time. 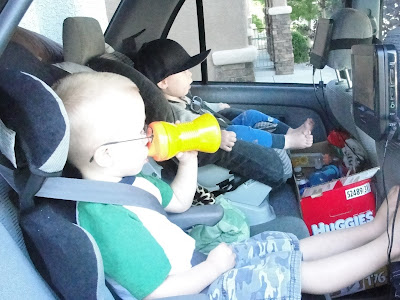 Unfortunately we have no pictures of hour 10 on the ride home. We pulled over on so Lennon could pee in some weeds. When he finished, Tod decided to go as well. He turns away from the car and unzips his pants. Just then I look over and see a line...no, a parade of cars coming towards him on a road behind us. All trucks with men staring at Tod who was (literally) hanging out of his pants just standing there. I believe most people would've turned away, gotten back into the car, etc...Tod just stood there, exposed, while all these cars drove by. The more I laughed, the more he laughed, and the longer it took for him to go. I'm surprised he wasn't arrested. Perv.

Coming soon - R-Ranch Part II: Watching your kids set things on fire. Or something like that.

Posted by MediocreMama at 1:12 PM

I think your life could be a really great tv show. Call Hollywood right now and get that going, okay??

this had me cracking up the entire time! can't wait for part 2!!!

Poo... oh the joys of motherhood!

There wasn't one part of the story that I wasn't laughing out loud. Seriously, great stories and great writing. Oh and thanks about the comment about me getting for the holidays on my blog. As you can see I work hard to keep it fresh and up to date. In case you haven't read it lately though Katie and I are expecting our first boy in November, so we'll be experiencing the same fun times you have over the past three years. I doubt ours will be as entertaining though. :)

Shouldn't have read this during a "really, really" important meeting. Couldn't stifle my giggles!

Invite us on the next road trip, because if these experiences are this entertaining to read, I can imagine what they'd be like if we were there. :) glad you survived the poo mishap! And Tod's little exhibitionist moment on the side of the road, doesn't surprise us!

beautiful blog..pls visit mine and be a follower.. thanks and God bless..

beautiful blog..pls visit mine and be a follower.. thanks and God bless..

You are a saint.

Well ... I knew the trip would be taxing, difficult and long ~ but even in my wildest imagination I didn't envision all this! I guess it's because we put all 6 of ours back in the camper and tried to ignore the screaming & pounding on the window separating us. It worked. (only kidding ~ sort of)