Is that a threat? 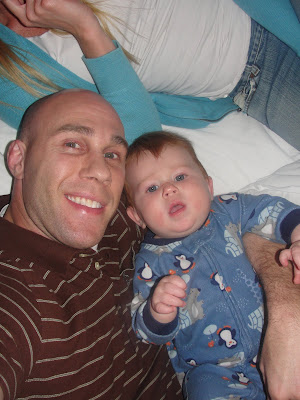 Don't ever talk to Tod late at night. I've never known anyone whose eyes roll back into their head mid-conversation. In his defense, he doesn't have a lot of downtime and is probably exhausted. However, he becomes downright offensive sometimes while drifting to sleep.
----
Last night we were talking in bed and his eyes starting rolling back so I told him to turn off the TV so we could go to sleep. He said what he always says when I ask him to turn off the TV...."Where's the remote?" to which I always tell him, "It's lost and you know that," which is when I end up getting out of bed and turning off the TV. This time I commented, "You're lucky to have such a good wife," which is when half-asleep Tod warned me:
"Watch out or you'll have a dead prostitute on your porch."
What?
"WATCH OUT OR YOU'LL HAVE A DEAD PROSTITUTE ON YOUR PORCH!"
Tod, what does that mean?
This is when he woke up and denied saying anything. Is anyone else disturbed?
-----
On a lighter note, the other night at the end of American Idol I was brushing my teeth and I heard Tod dialing someone on his phone. At 11 pm at night? I thought. And then I realized the impossible -- Tod was voting for American Idol. That Andrew Garcia has his heart.
Posted by MediocreMama at 9:30 AM

andrew garcia had my heart from day one! he's going all the way!

That is pretty hilarious! Also, on your previous post about picking your battles, we have a picture of Jaxon riding in the car with his Cars bike helmet on. It was his birthday and he wanted to wear it to McDonalds. Awesome. Sometimes its sweats, cowboy boots and a beanie that is entirely too small. I think our boys would be friends.

I totally understand what he meant, I threaten that with Erica ALL the time. I remember hanging out and witnessing Tod trying extremely hard to fall asleep. I just wish the turrets would have ensued. Side note--glad you guys got away for a nice weekend, but sorry we missed you. Sounds like all is well in the Wever household.

Are you sure he wasn't calling a prostitute?

Garcia has my heart too.

Weidro Tod... but don't be too alarmed. Peter does this to me all the time. He starts falling asleep in bed while we are talking and says some interesting things... but nothing about a prostitute. What's Tod got on his mind? :)

i have to say, i too would be a little concerned about the whole dead prostitute thing....but the american idol calling....CLASSIC

That cracks me up that he voted for American Idol!

As for the wreath, I don't usually like a lot of homemade things either! I was pleasently surprized that this one is a winner. It look like a lot of things in stores, so it's not too RS.

I am glad you like the sandwiches. It's my sister-in-law's recipe so I will let her know that someone else is a fan.