These are the pictures I have -- there are more from my mom's camera that I will post later. For now...here's how Larry came to be. It's important to note it all started with me looking like this: 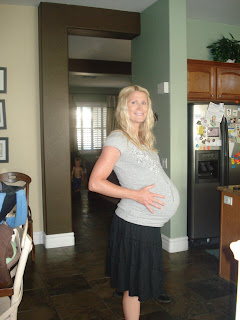 When you're pregnant, you start to think you look pretty normal. Your size increases so gradually that eventually you feel like the regular-sized girl standing next to you at the grocery store. Not so. I was huge. My belly was huge. I had no idea until I saw pictures. 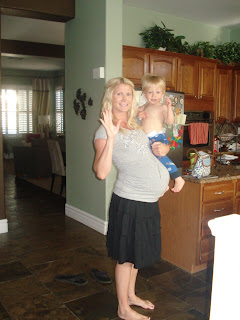 This is as we left for the hospital. At that point I was dilated to a four. I had been in labor all night and was ready for an epidural or someone to please just knock me over the head. 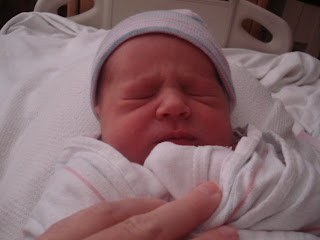 After 30 hours of labor total (Larry was face up which was why I was at a five for about 10 hours), Larry was born. Even being a week early, he weighed 8 lbs and 8 ounces. We were ALL EXPECTING A GIRL! For some reason most people thought we were having a girl. He was a pleasant surprise. 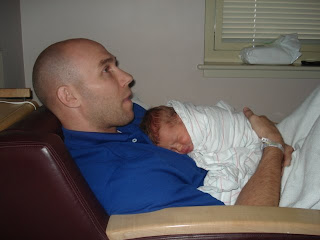 Tod and Larry at the hospital. Larry is named after two grandpas -- my grandpa Larry and Tod's great grandpa Coleman. It fits him perfectly. 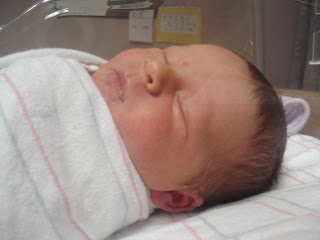 The kid was born with the nicest tan and movie star hair. I'm not kidding -- he looks like he's been on a tropical vacation for weeks and has his hair professionally styled. 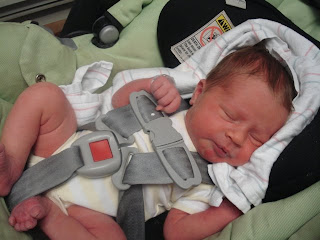 Ready to go home. The second baby is SO EASY compared to the first. With Lennon, we were so worried about the car seat, the seat belt, is he breathing? can he move? will he cry? is he breathing? should we loosen it? Tod, slow down! is the air on? is his skin cold? socks? no socks? etc.... With Larry, we just buckled him up, put him in the car, and drove home. 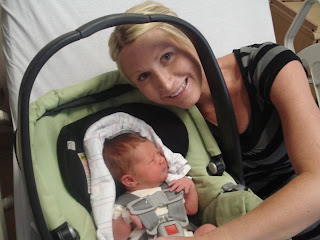 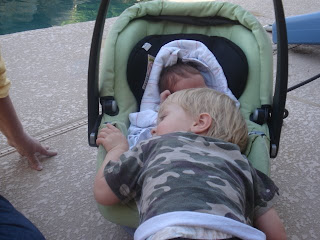 We took him home and Lennon was in the backyard with his grandma. He seems to like baby Larry. 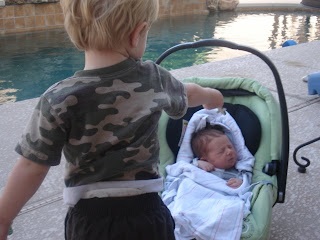 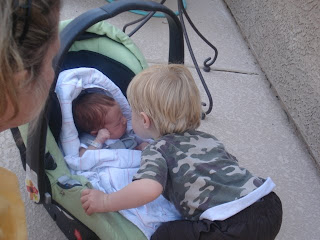 He gives him kisses all day and likes to lay ALL HIS WEIGHT on the baby as well. 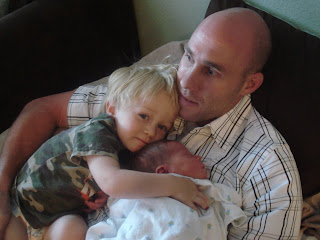 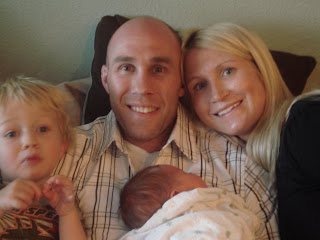 More pictures later! Thanks for everyone's well wishes and prayers. We are doing great.

Posted by MediocreMama at 8:43 PM

That is so awesome guys!! Congrats on Little Larry. He is adorable already, which is a great sign!!! You look fantastic by the way!!
We love you guys!

30 hours of labor...whoa! He was definitely worth it, what a beauty! He really does look like a movie star with all that hair, and the golden tan. I'm glad you're all doing great I'm so happy for your family. Love you guys.
ps- sometime soon you need to post a comparison picture of baby Lennon & Larry so I can see how similar they look. Consider it an official blog request... As if you're not busy enough.

Way to go, guys. The second baby phenom is real - just flick the binky if it rolls on the floor; none of this washing foolishness.
Baby is a beaut.

DARLING!!! The cutest thing in the world is to watch a child with their new sibling. All the sudden they become so big don't they? Precious. Congrats Wevers!!!

He's a beautiful baby. I love the pictures of Lennon with him. So sweet.

Yeah! He is here! Congrats, little Larry is so adorable! We can't wait to meet him!

P.S. Jon really really really wants you to change his name to Gary so he can call him Gary Coleman. He want's to teach him to say, "Whachyou talkin' bout Lennon".

You are so funny. Congrats on the new boy. I can't believe you were in labor for 30 hours!!! Oh my gosh! We have the opposite problem. My babies come fast. For my next child I think I might sleep in a tent outside the hospital. Good luck and congrats.

He looks so sweet! Love the hair and the tan! It is crazy that they can look so different from what you expect! Ryan and I were shocked with all of Camryn's long black hair! I still can't believe that you don 't know what you are having until it comes out! I could never do that...way too antsy! PS sorry for your long labor!

Congrats! He's so cute! You look great, too. Such a cute little family! I agree about the 2nd one being easier!!! :) Hey, was I the only one who thought you'd follow in Ann Dee's footsteps with another boy? ;)

He's beautiful! I'm sorry about the 10 hours, but it looks like he was totally worth it!

Oops. I meant 30 hours (just a slight difference). I must start reading things after I type them, but before I publish them! :)

What a gorgeous family! Those pictures are precious! We love you guys! I can't wait to get my hands on that baby!!

Congrats! He is so so cute. That really stinks about the long labor but they are so worth it. He is adorable!

Thk U, thk U, thk U for the pics! (Gary Coleman just wasn't cuttin' it.)'Lil Larry is BEAUTIFUL & you would never know he was early. Did it feel like you had twins in there,Holly? No wonder we all thought HE might be a SHE this time. You were carrying him differently. But NOT a disappointment in the least & how cute the boys are together!!! LOVE IT! (p.s. Coleman was Tod's Great Grandpa.) Keeping family names is a neat tradition.

Yeah!!! Welcome darling baby Larry. He is totally super-star material. Definitely has a great tan and perfect hair. We're so happy for you all! Congratulations!!!

Congrats Hol! Love him - and cannot believe you have TWO! Let me know when you need some girlie time. . . He's a doll.

Wups! I misread your blog guys.
You got it right on the namesake thing. Sorry ... Larry sure reminds me of Tod & T.J. at that age. Sorry you had to suffer so.

maybe he got his 'tan' from his REAL father, Gary. Just sayin'...

Really...Larry? Can we just go ahead and get him into therapy now to save time?

He's really cute =))
Can you even imagine teaching a sophomore class with that belly? lol, congratulations :]

I was ready to not leave a comment because of the amount that were already there, but then I read "K"'s--show your self K!!! Your name must suck too if you're only going by K...you wish you had hair and a tan like Larry--if you're that good looking you can have whatever name you want.

Congrats my friend--I'm glad that Lar-bear came early enough for you to recover and make it to the reunion. I need to see you guys.

congrats congrats congrats! he is such a little cutie pie and i love lennon laying on him with all his weight. Now it's perfect. Both monet and scarlett will have weaver boyfriends! HEY-O!

Congrats Holly & Tod! That is so great! Hope all is well! I was still rooting (sp?) for Mohammad, but Larry is a good choice.

OH, so a while back, a long while back, I remember you writing on here that you wanted to join a game show called, "Remember the Lyrics" or something like that. I got an offer to audition and I could give you the info! Up to 5k in prizes, I like that. =))

I am so glad you put pictures up, he is sooo darling!!! Congrats to you guys. You two are amazing and have a darling family. I agree with the second baby being easier, Samantha was easy and always has been. You guys have so many fun times ahead with your cute little kids. I am jealous... I love you

Oh, he is a beautiful baby! Has Todd considered that he could be Indian instead of Black? Just wondering.

Congratulations! He is adorable. And you're so right, the second baby is so much easier and less stressful than the first.

I'm so happy all went well!

I'd have thought it would be fairly easy to figure out...who else would be so gauche?

Anyway, as I was saying, very good looking boy. Those shots from the post above are loverly. And I've always been partial to the name Coleman, ahem.