Six years ago on President's Day Tod took me on our first date. We saw The Roots in Park City. That night we hit a herd (no exaggeration) of horses on our way home. Going 75 mph. Almost totalling his 4-Runner. I'd include pictures but (a.) don't know where they are and (b.) it's just a lot of horse blood, guts, and shattered glass.

[I still remember the insurance rep on the phone asking Tod if there were any witnesses. He told her all the horse's buddies had fled the scene already....so, no.] 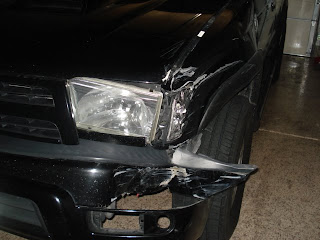 Last night someone cut him off causing him to swerve and then skid to a stop...right into a Student Driver van. When it rains in Vegas, it's almost like ice; roads are extremely slick. Luckily no one was hurt (including farm animals). Luckily, Tod has a wife who understands the importance of tradition. Some people barbeque during three day weekends; we crash our cars.
Speaking of rain: When it rains, it truly, TRULY pours. Just in the last month, we've replaced two car batteries, called one tow truck, had one flat tire, Tod spent two hours stranded on the side of the freeway, countless jumps, a transmission that is rapidly going out, and now this.
Rain, rain go away.......
Posted by MediocreMama at 12:51 PM

Yikes! I'm glad you have such a great sense of humor about this! I hope Tod isn't hurt...though by now, he probably doesn't even flinch when he is in a crash. A true Pro.

Really? Really you hit a herd of wild horses?! Do you ever feel like you have really bad luck? I feel like that all the time and I find odd comfort in the fact that someone else out there seems to have the same. The fact that Todd was calm enough to make that comment to the insurance lady after an accident and on a first date kind of makes me want to be his best friend. This is GREAT stuff--not that your car is wrecked, but these stories are worth more than the car...it's all about the silver lining.

Holy crap! That's so bizarre. But I have to admit, it makes for a great blog post. Thanks for keeping me entertained. I always look forward to your updates.

I suggest staying home on President's Day in the future.

Holly, everytime I read your blog I cry, from laughing. I'm so glad Todd is ok and those poor scared student drivers. I'm sad we didn't see you guys when we were down there. Maybe next time?

I called Tod the horse whisperer until you guys got engaged.

take that boys license. i remember your church talk talking about all his accidents. I would officially ban him from driving any family member around. bye bye keys.

Holly,
You tell your husband THAT is why I gave him that extra hug at the airport and told him to drive care-fully. He pulled away and was all defensive ... but I was with him that night as he went from appt to appt and he scared the living daylights out of me! So much for "intuitive thought" ... he needs to SLOW DOWN and pay attention! Okay ... enough lecturing from his mom. Glad he and everyone else is okay. Thank
you AGAIN Lord!

Holly - love your humor - i know to you it's not even humor - but you crack me up! love ya! Mesh

I can't believe it was 6 years ago...I still remember that conversation on the phone. This post made me laugh- but car problems are the worst. So sad we weren't able to meet up last weekend.