I believe in miracles

Tod and I generally agree on most things. One thing we've never agreed on: Tod is an interesting guy. If you come to town, he'll let you stay in his house, he'd give you his own clothes to wear, he'd let you drive his car, he'd even buy you dinner. Every night. Bring your friends! It's on Tod!
However, when it comes to paying for heat or air conditioning, Tod is adamant -- WEVERS DON'T NEED IT! Wear a coat while watching TV in the winter, make a paper fan if it's summertime, drink some lemonade, jump in the pool...but DON'T TOUCH THE THERMOSTAT. Direct quote, "I'm not paying $650 a month just to keep my house at 80 degrees!" [True story: Two months last summer, our bill was over $600. I was pregnant. It was hot.]
Perfect example I stumbled upon a couple days ago when returning from the gym: 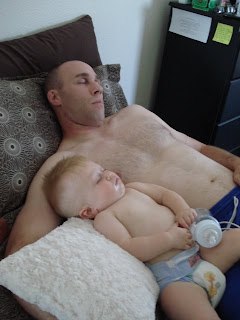 Both boys, asleep, and half naked. I haven't dressed Lennon in days; he'd melt if I did. Don't believe me? My lipsticks have melted. Our bottled water (at room temperature) could be mixed into hot chocolate. . .

Which leads me to Miracle #1: On Sunday night, after temperatures spiked to 105 degrees...TOD TURNED ON THE AIR CONDITIONING! It felt like the most romantic gesture. Like he'd given me a dozen roses. But better. And more expensive.

Our almost three-car garage has been filled with everything BUT cars for two years...until yesterday. Tod waited until the news issued an EXTREME HEAT WARNING, and spent that day cleaning our garage. I've never loved him so much as I did when we pulled BOTH cars in for the night. Tod, you made two of my dreams come true. 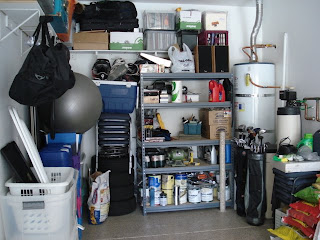 Just a glimpse of his organizational skills. Thanks, Tod.

Marriage is funny; forget the roses, just turn on the air conditioning and clean the garage. And then sometimes give me roses, too.

Isn't it funny how things change. I'm so much more practical in my desires for romantical expressions of love. The things they do are just as romantic as any fairy tale story in the movies:) Good work Tod.

Also, love the picture of the two boys passed out asleep. So cute!

lol! Thanks for the laugh & good job Tod!

Hey I stumbled across you blog... I love it! I tell you nothing is sexier than LJ cleaning my toilets so I don't have to do it... men should learn that we really are that easy to please!!!

What a lucky girl you are. This behavior is also within the MUNOZ home. Christian (being from Panama) believes that California does NOT get hot enough to need air conditioning...I wish I had a picture of him asleep on the KITCHEN FLOOR Saturday night!

Reading this makes me laugh because Curt and I also fight over the temp. in the house. I have to agree with Tod on this one. I think it was 82 in the house before I gave in and turned the air on. I just love getting our power bill the last few months and it being $100 bucks!
Before going to bed I'll say I'm going to go check on the kids, but what I'm really doing is setting the temp. to 79. Ha, Ha, Ha! And when he asks if I touched the thermostat I say NO!

Come stay with us for a little while! Summer hasn't really started yet and we are still in the 60s.

Gosh, Brooke ALWAYS beats me to the comment (granted, I haven't had time to check any blog for a month - including Mom's). But I mean, c'mon, didn't I bring the Wevers into the relationship. She did provide the truck and a few good CDs, but I provided Wevers. I don't go on her BFF's pages and beat her to the comments.

...Anyway, I'm with Senor Tode. Put a coat on or take it off ladies.

And my word verification is fkrfyt -Couldn't help but to laugh as my neighbor cusses out somebody on the phone.

One year Colton gave me a janitor sized dust broom and a mop with a bucket for my birthday. I was so excited, we cleaned the floors right then. (The center street house had a lot of floor to take care of.)

Eight comments....who gets that?! Ne..... That pic of Tod and Lennon is priceless. So so so darling.

Wow, you are one lucky girl!! I have been trying to get Sam to clean our carport for months. Yes! It is a carport so all the world can see all our crap! I am going to have to break down and clean it. That picture of Tod and Lennon is so darn cute

Thank you for this topic I am interested in, thank you for providing extremely useful information.
By the way, I have a few products you can consider adding https://besttoolsadvisor.com