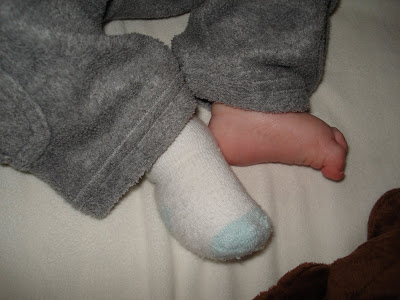 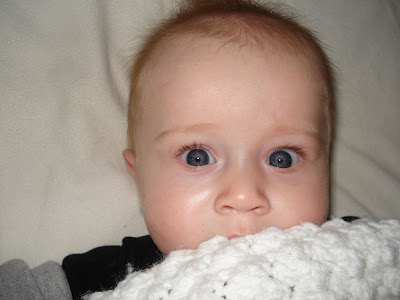 Lennon goes to bed each night
around 5:30 pm and doesn't wake until 7 am...people don't really believe me when I say this but it's true. Then they ask, "Wow, how did you train him to do that?" Simple. Lennon won't take naps.
I've read books about it, I've stuck to programs for it but he will NOT take naps. I take that back; he takes naps. 15 minute naps.
If you don't believe I took these pictures today, 45 minutes into nap attempt #2. Wide awake and naughty as ever.
We have had a few good days here and there, but as a general rule, Lennon doesn't think naps are cool. 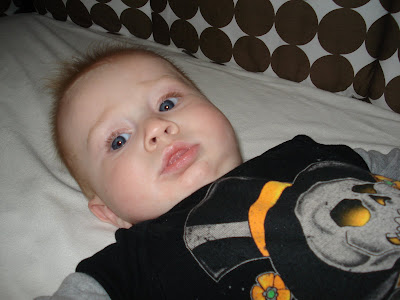 Then people say to me, "Keep him up later, he'll sleep better during the day." (Grandma Karen) To those people I say, YOU keep him up later! It's almost impossible! The other night we tried to keep him awake until 6:30 pm...he became so ornery and tired that he wouldn't eat! We put him to bed angry and hungry. So we stick with 5:30 now.
In the picture above, you see that he's missing a sock. Is that the problem? Lately he likes to suck on his toes. Do they become cold? Are his socks too big? And why only one sock? 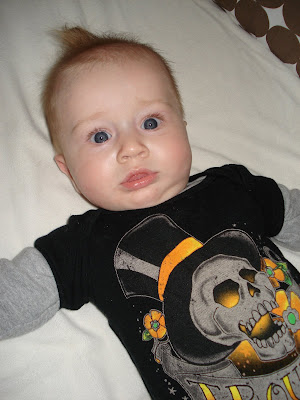 Here's the worst part: When he wakes up, he cries and cries and cries until I go in to get him. As soon as the door opens, he stops crying, starts kicking his legs and giggling. Does he just want to play? Is this what I can expect for the next 18 years? He's so hard to resist, I always laugh once I see him and we hang out once again. Sigh. The end.
Posted by Tolly & Lennon at 12:34 PM

His eyelashes are getting so long. He is such a beautiful baby!!

I'm so sorry about the nap situation! Although, it's pretty great he sleeps so long at night!!! We're trying to increase Cohen's sleep time. It doesn't really help that I keep him out until 10 pm Christmas shopping.

Nap's can be so frustrating!! I still can't get over that he sleeps so long at night - AMAZING! It was so great to meet you and your cute family! Lennon is a doll and we are excited for Saturday! Thanks! Here is our blog:
hawleyfamily2002.blogspot.com

SORRY, So SORRY!! Your missing some good uniterrupted Oprah time. Try try and try again!!! But 5:30 come on, you need to stop compaining right now!! He is so flippin cute!

That's fantastic that he's such a good night sleeper. I say... all babies are different. Do what works best for you and Lennon! Benson is down to three naps a day. It used to be four. He goes to bed between 7 and 8pm and usually wakes up at 7am. But, he demands a couple of feedings in the middle of the night. I would love ONE good nights rest...but on the flip side... I do have some daytime hours to get a few things done. Again, they're all different. And wonderfully so:)

It's a phase. I'm being serious. Don't stressed...anymore. I experienced something similar and was almost convinced I was a bad mother. He may just be excited about playing.

My suggestion...not that you asked...or did you? (I have a hard time remembering exactly what was in the post when I go to comment.)

The early bedtime is totally fine. Keep trying with the naps and eventually the phase will pass, and he will take naps again. This may be crazy but sometimes I had waited too long to put Holden down hoping that he would be more tired...which he was but he wouldn't fall asleep. Maybe the naps closer would help...or not.

In a live conversation...this comment wouldn't have seemed so long. Sorry. I hope it made sense.

Lennon is so cute. I think it is pretty funny that he is all giggly when you go to get him. Isn't it so nice after they have been crying.

"stressed" may look like a type-o, but I meant it for impact.

And the question as to whether or not I am a bad mother still comes up for debate from time to time.

Perhaps if you and Tod were "a little less COOL" then he would not want to be awake hanging out with you. To be honest, I have found I have the EXACT same issue while around the "TOD AND HOLLY pair". You guys are freaking awesome, so TONE IT DOWN ok!!!
loL!!
LOVE YOU GUYS!