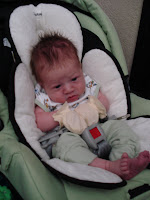 This picture was taken as we prepared Lennon for his first doctor's appointment. Little did I know that it would take us an hour just to get out the door...changing him, re-changing him (he loves to do that to me!), feeding him, dressing him, packing a diaper bag, cooling off the car, figuring out the carseat again, etc...we finally made it and the doctor said he looks great. 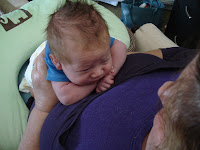 Later that day, Grandma Karen was rocking Lennon and singing to him. As soon as she started singing, he lifted his head, folded his arms under his chin and listened. We did NOT pose him for this picture! I couldn't get a good face shot, but look at his hands! We thought that was so funny. 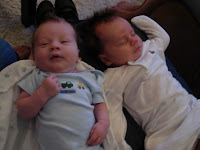 Finally, Lennon had a visit from his buddy Cru Carmen last night. Cru is a mature seven weeks old, so his size was astounding to us. He also seemed to know a little more about life in general and Lennon took a lot of advice from him before they left. We are sure they'll be fast friends.
Otherwise, nothing new going on here. We're adjusting to this new lifestyle and I'm starting to realize that nighttime is not for sleep necessarily...I just sleep when I can! Once I realized that, getting up throughout the night wasn't quite as painful. Who needs sleep?!

Hey new Wever parents! I just want you to know that I love my new great nephew, and I've spent my Sunday night being entertained by your blog. My only regret is that your mother won't like my children as much anymore...and she shouldn't. I just won't tell them.
Hope we get to see you in person soon! love Aunt amy

I am loving all of the new pictures! He's the cutest!
Alana

Holly- I am thinking that little tike is very cute and very Monchichi-like. If there is ever a film adaptation I think he's be a natural. Tod on the other had looks like a noble and majestic elk...perhaps that could be worked into the storyline.